June 3, 2012 by ConcertKatie No Comments 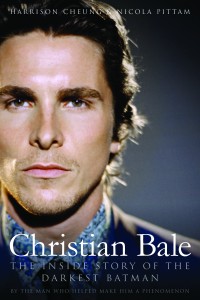 I have to admit, that I didn’t know much about Christian Bale before reading his biography.  I know my brother was going on about how he lost a lot of weight for a role once and I obviously knew that he was Batman in the more recent movies, but that’s about where my knowledge ended.

Now, I think I know more than I ever wanted to know about Christian and his family.  The book is written by Harrison Cheung who started out as a fan of Christian and when the internet was first starting out, he promoted Christian on AOL and Compuserve forums. (The talk about how these boards worked was giving me flash backs to my teen years and talking about Hanson.)  Harrison wrote letters to Christian, and when he got responses he figured that he could come up with some way to help promote Christian. He proposed that he start a website for Christian to keep fans updated with what movies he was working on and when they were coming out as well as to get fans to help promote him on the internet.  Christian agreed (hating doing publicity tours, this was an easy way for him to not really have to deal with interviewers) and eventually Harrison ended up becoming an assistant to Christian – so who better to write the biography?

It talks about how Christian’s father moved him and his sister to LA which resulted in his wife getting a divorce for him.  His father had no job and ended up living on an expired visa for quite some time.  He was in charge of Christian’s finances and grossly mismanaged them, which put Christian in some trouble at times.

For a while he thought he was Box Office Poison when a lot of his movies were not fairing too well on the big screen.  But his fans kept up their promotions of him on the internet and helped make him one of the most popular internet stars.

Now Christian Bale is a household name, having played Batman in the blockbuster movies, however, he’d much rather be able to still go around town and not get recognized and have to deal with fans and interviews.

The darkest Batman is unmasked.

During the London press junket for The Dark Knight in the summer of 2008, Christian Bale was infamously accused of assaulting his mother and sister at the five-star Dorchester Hotel. Six months later, a recording of Bale’s rant on the set of Terminator Salvation was leaked, and the star’s anger began to define him.

But beyond his notorious temper, Bale, an Academy Award-winning actor for his role in The Fighter, is known for his ability to physically transform himself for roles in American Psycho, The Machinist, and as one of Hollywood’s most revered and bankable characters-Batman.

In Christian Bale: The Inside Story of the Darkest Batman, Bale’s former publicist and assistant Harrison Cheung-his real-life Alfred-shares an inside look into the little-known personal life of the intensely private and reclusive actor. In the first biography of the Batman star, Cheung, who lived and worked with Christian and his father for 10 years, shares firsthand accounts of the Bales’ familial dysfunction, Christian’s morbid fascinations and dark humor, and his extreme dedication to his craft.

Aware that Bale hated his traditional publicity duties, Cheung launched an extensive Internet marketing campaign for the actor, built the first official actor website for him, and cultivated the Baleheads, an online fan community that was used to garner editorial coverage and ultimately help Bale secure the role of the Caped Crusader.