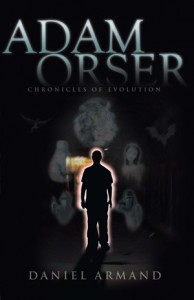 Adam Orser The Chronicles of Evolition by Daniel Armand is the most recent blog tour that I am participating in.  It is the first book in a trilogy. It took me a little bit to actually get in to the story, the first few chapters came off as confusing for me (but I guess that is what you get when you don’t give a book your undivided attention)  once I got in to it then I was able to fly through the rest of the chapters with no problem.

As I mentioned, the book is a bit long. 40 chapters (although some are only a couple of pages each) and 343 pages total.  It does look a bit intimidating at first, but really if you stick it through the first 5-10 chapters then you should have all the background info you need to know to be able to follow the rest of the story all the way through.

After Adam is in a serious car accident and ends up in a coma, he ends up in an alternate reality where he is assigned a mission involving a kidnapped girl.  So we really have 2 stories in one – one where Adam is in the coma and his poor girlfriend (who he was going to propose to before being called off for his alternate reality mission) doesn’t know what is going on with his situation and wants any sort of sign from him that he can hear her and then the alternate reality where he is on this crazy mission with some others trying to save this girl.

Remebering now that it is a trilogy, some of the things I was expecting to happen that didn’t – I’ll just have to hope that they end up being covered in the additional books to follow.

I would recommend this for adult readers (there is some strong language) who are interested in finding out about the action that is going on with interdimensional communication!  It definitely was a theory that made me think – what if this thing really does go on and there are other alternate realities where we are present as well? hmm…

Adam Orser: The Chronicles of Evolution

Adam Orser seems to be a regular guy, leading a fairly successful life in Toronto as a psychologist with a loving girlfriend, Jazmin.But there is nothing ordinary about Adam.Fate interrupts his planned marriage proposal, and a serious car accident thrusts him into a metaphysical reality behind a deep coma that holds his physical body in check. Through an advanced system of training and evolution created by the celestial realm, Adam is called to a dangerous mission with profound implications for the world he knows, and life and death consequences for one missing nine-year old girl, who is no ordinary kidnapped child. Fantastical forces are at work on both sides of the veil between the world we recognize and those yet to be discovered.Destiny compels Adam to freely choose the part he will play in a no-limits competition between good and evil. Questions of existence, causality, and truth converge as Adam struggles to find his way back to Jazmin and a life that will never be the same.
About the Author
Daniel Armand Bio:

Daniel Armand lives in Toronto, Ontario. His inspiration behindAdam Orser: Chronicles of Evolution originated during the summer of 1983, after a near death encounter offered an incredible insight into the obscured aspects of life, love, and the progression of the human spirit.Daniel is currently working on the next novel of the Adam Orser saga. “I truly hope this novel will help inspire readers all over the globe, to embrace their spirituality. It is through clarity of mind and understanding that we may one day ‘bloom’ into harmony and unlock our limitless potential.”

The official blog tour website for this book is:
http://adam-orser-chronicles-of-evolution.blogspot.com/