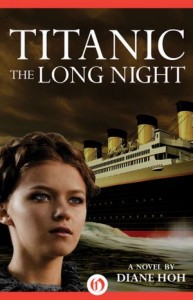 It looks like I found another Titanic book that I hadn’t read yet! Titanic:The Long Night is historical fiction novel by Diane Hoh.  It tells the story of two girls aboard the Titanic – Elizabeth and Katie.
Elizabeth is a first class passenger and is heading back to America after a trip to England.  When she gets back to America she will be making her debut to society and marrying Alan – a gentleman that her parents have arranged for her to marry but that Elizabeth doesn’t love.  Elizabeth wishes to go to college instead, but her father and mother have other plans for her.  While on the Titanic her parents introduce her to a friend’s son, Max, and the two quickly fall in love with each other.  When she tells her parents that she is not in love with Alan and doesn’t want to marry him, her parents don’t want to hear it.
The two girls trips almost parallel each others, but Katie is a third class passenger from Ireland.  She is heading to New York – Brooklyn to be exact to live with her aunt and uncle and she hopes to be an actress.  She is traveling with brothers Brian and Paddy.  Of course, a love triangle develops.  Paddy thinks that Brian and Katie should be together and gets upset when Brian starts being friendly with a Swedish passenger.  Brian urges Katie to tell Paddy how she really feels about him and that she doesn’t love Brian and urge him to get on a lifeboat with her when the boat starts sinking.  Katie does manage to get Paddy in a lifeboat by saying that he is a seaman.  This ends up getting him taken off the boat to go back and look for survivors.
With Paddy on another lifeboat looking for survivors – and Elizabeth having no idea if Max got on a boat after she left him on the deck – will either girls be reunited with their loves? Or will Elizabeth be forced to carry out her arranged marriage to Alan and Katie be forced to finish her trip to New York alone?  Find out all this – and more! In Titanic: The Long Night.
I’ll admit it, I was a bit excited that the girl in this book was named Katie.  Unfortunately she is quite Irish and has red hair so I couldn’t quite picture her as me – that and she had quite an accent – even in print.  But it was fun to see my name there. I kind of hoped for a bit of a different outcome with the book – I won’t go in to too much more detail but some of the tales of how some people survived versus how others didn’t, didn’t really seem to make that much sense.  But considering it is fiction (albeit based on a historical event) I guess I won’t try to look too much into the logic of it all and just take it for a historical fiction love story instead.
I received a free e-copy of this book from the publisher through NetGalley in exchange for writing this review. I was not otherwise compensated.
About the Book
Two teenagers discover true love aboard the doomed ocean liner
Elizabeth Farr never wanted to return to America. During her family’s vacation abroad, she has fallen in love with England, and is despondent when her father refuses to let her stay. Returning to New York means having her debut into society, and that means a swiftly arranged marriage. Elizabeth will never go to college, never learn to be a reporter—as she sees it, her life is over as soon as the Titanic reaches port. Of course, if she’s unlucky, her life will be over far sooner than that.
As Elizabeth and her family settle into their first-class cabins, Katie Hanrahan, a young Irish girl with dreams of finding fortune in America, makes her way to a steerage berth. Both girls have plans for the future, but love and death are about to intervene.
This ebook features an illustrated biography of Diane Hoh including rare photos and never-before-seen documents from the author’s personal collection.