Book Review: Prize of my Heart 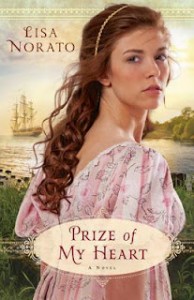 Prize of My Heart by Lisa Norato tells the tell of Brogan, a sea captain whose wife left him, taking their son Benjamin with her.  Brogan has been looking for him for years and finally finds him living with the Huntley family, his “sister” Lorena taking care of him.  He is now known as Drew, called that as short for Andrew because it had the same D sound as David – a bible character that Drew can relate to.

As a child, Benjamin (now Drew) was given a doll named Captain Briggs, created in his father’s likeness.  Drew still carries this doll around even year later because he believes that his father was killed at sea and he now has a new family with the Huntleys.  Brogan spends some time with Lorena and Drew before revealing who he is to them and begins falling in love with Lorena and proposing.

Brogan then reveals who he really is to the two of them, and they do believe him right away.  However, time with Lorena’s father tells more of the story of Brogan’s wife Abigail, Benjamin’s father, and how Benjamin ended up living with the Huntleys.

This was a great historical novel, short, coming in at only 20 chapters and under 300 pages.  You could easily read it in an evening or two. I thought that the authors descriptions of everything were really great  and I could easily picture this 1815 New England town and the ships that were involved as well.  I loved the twists and turns in the story – and of course the ending – which I’ve tried to avoid mentioning so that you can find out for yourself when you read Prize of my Heart!

I received a free copy of this book from BethanyHouse in return for writing this review. I was not otherwise compensated.

Three years ago, Captain Brogan Talvis’s late wife abandoned their son, leaving no clue as to the boy’s whereabouts.  After searching relentlessly, Brogan discovers his son was adopted by a New England shipbuilder. And the main’s daughter, Lorena Huntley, acts as a loving guardian to the child.

Lorena, who hides a dark truth, finds herself falling for the handsome captain and ex-privateer who’s come to secure ownership of one of her father’s ships. She’s unaware of Brogan’s own secret when another’s deceit has her sailing toward Europe against her will.

Haunted by the thoughts of Lorena in peril, Brogran is compelled to choose between the boy he longs for and the woman who has captured his heart.

Will His Love Endure Once He Learns Her Secret?