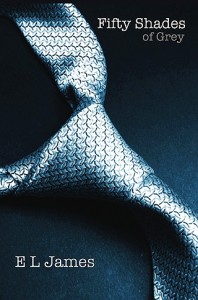 The latest popular book that everyone seems to be reading is Fifty Shades of Grey (and the 2 additional books in the series – Fifty Shades Darker and Fifty Shades Freed).  These books started out as fan fiction about Twilight – in an alternate reality where Edward and Bella are not vampires. (Which is good because I’m not sure I can handle a vampire book. I tend to avoid them because I think it is overdone.)  In order to be published the names were changed and a new popular book series was born.

The books are about Christian Grey, a rich business man who makes something like $100,000 per hour.  He meets Anastasia Steele when her roomate Kate is too ill to do an interview with him for their college paper.  Christian ends up interested in Ana and a relationship develops.  However, Christian is looking for a submissive and the rest of the story becomes extremely sexual. (And I’m not sure if ‘extremely’ is extreme enough of a word)  At first I heard that the books were nothing but sex and when I got to page 80 and still nothing had happened, I thought maybe people were exaggerating.  Let me tell you – they weren’t.  Once everything started happening… well, then it didn’t stop.

The books really are not all that well written, which is to be expected of fan fic.  But there was just something with this story and the characters (mainly Christian) that kept me wanting to read more.  Christian is certainly an interesting character and while Ana does try to get some back story out of him throughout the series, he is not always forthcoming with information about his past.  We know that he was born to a crack whore who died and he was left with her for several days and then he was adopted by the Greys.  We get told a little bit about what got him into the lifestyle of being a dominant to his submissives but it really takes him quite some time to fully explain everything to Ana and I’m not sure that everything is even out there.  I’d definitely be interested in a spin off book about Christian as a child / young adult because I think there was a lot of background to his character that was left to be desired.

There is talk now about the books being turned in to a movie and honestly I am not sure how they are going to do that. It would have to leave out a LOT of the sex scenes, I would think, and that seems to be what draws most people in to reading them.  I have no idea what actors I would want to see in it either.  I did have someone in mind when reading for Christian, but I have no idea who I’d pick for the role of Ana.  If you’ve read the book(s) – leave a comment with who you think should be cast for the movie, if it were to happen, or who you pictured in the roles. (Even if it is a hybrid of several celebrities)

I was not asked to post a review on these books. I read them on my own time and decided that I wished to share my thoughts on them with my readers.