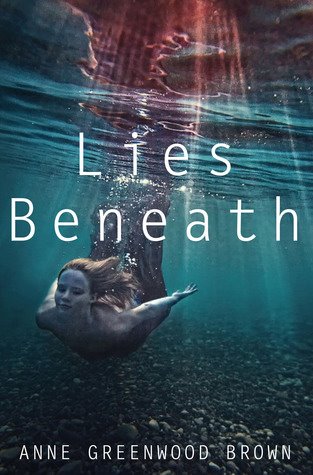 Lies Beneath by Anne Greenwood Brown is about a family of mermaids (and a merman) who are on a mission to find Jason Hancock.  They believe Jason’s  father had something to do with why their mother died, so they are looking to kill Jason to get their revenge.

Calder White, the merman of the family, spends his winters in the Bahamas.  His sisters call him back home to Lake Superior telling him that they think they have found Jason.

Jason and the rest of the Hancock family are moving in to Jason’s father’s old home now that he has passed away.

Calder tries to befriend Jason’s daughter, Lily, in order to go through with the family’s plan to kill Jason.  However, despite his sisters warnings, he begins to fall for her.  While at a party with her new friends, Calder finds out all about the “legend” of the monsters of the sea.

I don’t want to give too much away with the story – but it is definitely a good one that will keep you wanting to read more to find out if Calder’s relationship with Lily spoils the family’s plan to kill her father or will they go through with killing Jason?  You’ll just have to check out Lies Beneath to find out all the answers!

I love stories that are wild and not based on real life.  Well, I guess to a certain extent this story is based on real life, but as far as I know – Mermaids aren’t real. I really like that aspect of stories where I can escape the real world and venture in to a new world that is different.

I received a free advanced e-copy of this book in order to write this review from the publisher through NetGalley.  I was not compensated nor was I asked to write a favorable review.  All opinions are my own.

The lore of mermaids and mermen is real. Just wait until you meet Calder White in this addictive debut novel that is destined to make a splash!

Calder White lives in the cold, clear waters of Lake Superior, the only brother in a family of murderous mermaids. To survive, Calder and his sisters must prey on humans and absorb their positive energy. Usually they select their victims at random, but this time around the underwater clan chooses its target for a reason: revenge. They want to kill Jason Hancock, the man they blame for their mother’s death.

It’s going to take the whole White family to lure the aquaphobic Hancock onto the water. Calder’s job is to gain Hancock’s trust by getting close to his family. Relying on his irresistible good looks and charm, Calder sets out to seduce Hancock’s daughter Lily. Easy enough, but Calder screws everything up by falling in love—just as Lily starts to suspect that there’s more to the monsters-in-the-lake legends than she ever imagined, and just as the mermaids threaten to take matters into their own hands, forcing Calder to choose between family and the girl he loves. One thing’s for sure, whatever Calder decides, the outcome won’t be pretty.

ANNE GREENWOOD BROWN grew up sailing the Apostle Islands on Lake Superior, leaning over the rail and wondering, with a lake that big, that ancient, what amazing thing might flash by. Now she knows. Lies Beneath is her first novel.