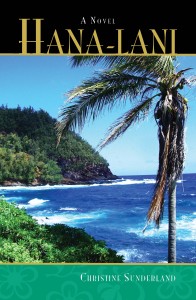 Hana Lani is a book by Christine Sunderland.  There are four main characters in the book.  Henry, a widow in his 50s.  Nani, his grandmother.  Lucy, Henry’s young daughter and Meredith, a victim of a plane crash who is living with the family while she gets back on her feet.  This book is short – somewhere in the ball park of 200 pages, but it really packs a punch.

Meredith fits in to the picture when she heads to Hawaii after losing her job and finding out that her boyfriend was a jerk.  Her plane ends up crashing near Hana-Lei which is eventually going to become Lucy’s.  Lucy quickly takes a liking to Meredith and calls her “Princess” because she is so beautiful.

At first, Henry doesn’t want to be bothered with Meredith because he is trying to finish the book that he and his late wife were writing.  Eventually he ends up letting loose and seems to fall for Meredith.  He shows her around the island and slowly lets her in to his life.

I don’t want to give away much more – but there is a HUGE twist near the end.  I totally did not see it coming and was really shocked – and the book ends soon after the twist and it really left me wanting more to find out what happens to these characters – but as my mom said “You’ll just have to make up your own ending for them.”

I received a free copy of this book from the author in exchange for writing this review.

Old Nani-Lei lives in Hana-lei, her family home in rural Hawaii.  She looks after her grandson Henry, 52, and his daughter, Lucy, 6, who have returned to Maui from Berkley after the death of Maria, Henry’s wife.  Henry and Maria, both professors, had been working on A History of Ethics, and now the grieving Henry struggles to finish it.

City girl Meredith Campbell, 36, fast-paced, self-centered, and beautiful, believes her body will ensure her happiness. After losing her job and finding her lover unfaithful, she flies to Maui, sure he will follow… but her plane crashes near Hana-lani.

As their worlds collide in a natural world both beautiful and dangerous, Henry will be forced to act on his words, and Meredith will come face-to-face with her own life choices.