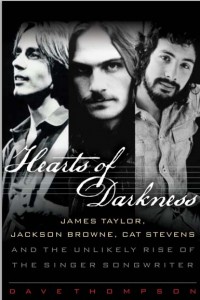 I was excited to start reading Hearts of Darkness by Dave Thompson.  The book is about James Taylor, Jackson Browne, Cat Stevens and the unlikely rise of the singer songwriter.   These 3 artists (as well as a few others) were definitely staples in my household growing up.  It is one of the first books that I’ve read lately that has been music related where I can sing nearly every song mentioned just by seeing the title.  (And I even was tempted to bust out spotify to reminisce a bit several times when reading. Which I would have done if I wasn’t reading the majority of it during breaks at work, where spotify is a no-no.)

Although, I have to say, once I got in to the book, my excitement quickly faded.  The book is essentially 3 biographies in one.  But rather than split it in to 3 parts, one about each person, it kind of alternates chapters.  In a way, it is nice because if you get bored the story very quickly moves on to something else for a bit, but on the other hand, if you get in to the story then there are 2 chapters about someone else that you have to get through first to continue it.  At times it was a bit difficult to follow along with.  It’s also pretty long – my Nook clocked it in at 454 pages.  Obviously, very thorough, but it didn’t flow the way I would have liked it to.

It was cool – though a bit shocking too, lol – to see that a lot of the same people mentioned at the record labels are still around today.  David, Geffen to name a couple that I can remember off the top of my head.  A lot of mentions of Danny Kortchmar too, who was heavily involved in the creation of Hanson’s 4th studio album “The Walk” and obviously a big part of “The Story” that Hanson told last October when I was in attendance about the creation of the album.  It is always fun to see a name and be like “Hey I ‘know’ him!” in these books. (Usually I know them somehow due to something they’ve done with Hanson.  Screw 6 degrees of Kevin Bacon – I can do 6 degrees of Hanson! ha)

Hearts of Darkness is the story of a generation’s coming of age through the experiences of its three most atypical pop stars. James Taylor, Jackson Browne, and Cat Stevens could never have been considered your typical late-sixties songwriters-self-absorbed and self-composed, all three eschewed the traditional means of delivering their songs, instead turning its process inward. The result was a body of work that stands among the most profoundly personal art ever to translate into an international language, and a sequence of songs-from “Sweet Baby James” and “Carolina in My Mind,” to “Jamaica Say You Will” and “These Days,” to “Peace Train” and “Wild World”-that remain archetypes not only of what the critics called the singer-songwriter movement, but of the human condition itself.

Author Dave Thompson, himself a legend among rock biographers, takes on his subjects with his usual brio and candor, leaving no stone unturned in his quest to shine a light on the dark side of this profoundly earnest era in popular music.

Penetrating, pointed, and laced with vivid insight and detail, Hearts of Darkness is the story of rock when it no longer felt the need to roll.