Saturday evening I went to see Hanson at the Gaylord National in National Harbor, MD.  (My 100th concert in a state other than my home state of CT!) Before leaving we found out that National Harbor is actually Oxon Hill, MD! Luckily we figured that out because I don’t think the GPS would have gotten us there otherwise.

We were able to purchase a packaged deal which included a one night stay at the hotel, tickets to see Hanson and a M&G pass for after the show.  It seemed pretty reasonably priced (only and extra $10 per person for the M&G!) so we went for the full VIP treatment. 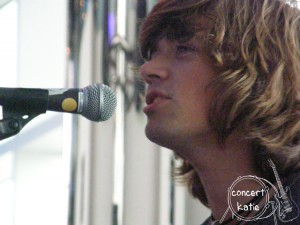 Fresh 94.7 was hosting the event, and I have to say they were completely organized and everyone that I had met working for them was incredibly nice as well.  The staff at the hotel was also really nice too!

Justin Trawick (http://www.justintrawick.com/) was the opener and did about 8 songs.  I enjoyed him, however the majority of the crowd made it fairly obvious that they were there to see Hanson by rudely talking through most of his set. 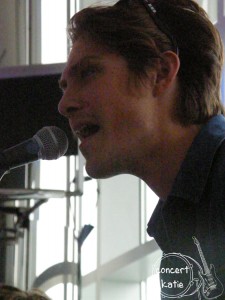 Next up it was time for Hanson.  They came out really quickly after Justin’s set and I think they were not prepared to be hitting the stage so soon! They did a 10 song set and chatted a little bit with the crowd.  The airline had ruined one of Isaac’s guitar on their trip and they talked a bit about that and dedicated “Strong Enough To Break” to the lost guitar, Pablo.  On the line “play like broken records..” Isaac sang “Play like broken guitars” 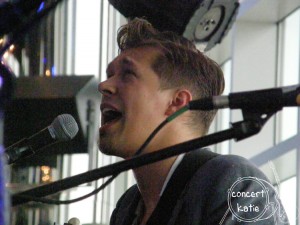 After the set we waited a bit for the M&G to start.  My friend had a picture of a billboard that is in PA that says “Even though her favorite band is still Hanson” which is part of their ad campaign that features a bunch of billboards on why you should still propose to your girlfriend “even though”.  Isaac and Taylor didn’t seem to understand what was going on so I tried to explain “You still propose.. even though her favorite band is still Hanson” and they still didn’t quite get it.  Zac, however, seemed to understand more after my explanation so we talked a bit about how is it a bad thing to like Hanson (no) and he wasn’t offended by the billboard but wasn’t exactly sure how to take it either.  At least now I can joke that Zac and I talked about getting engaged! (Though.. not to each other.  He is happily married and I’m… happily single?)

The radio station took photos of us while we were talking to the guys, we weren’t allowed anything posed.  I am (not so) patiently awaiting for those to be added to the station’s website!