On Monday night’s episode the top 9 had to write a hook for a rap song. The guest judge was Rodney Jerkins who has worked with a bunch of great artists – including Michael Jackson. (This of course got Nick’s ears to perk up as he loooves MJ)

The theme for their rap had to be super powers. I thought some hooks were much better than others and once again I didn’t exactly agree with the top 3 that the judges picked! Coming in 3rd place was Jackie – her rap was about wanting the super power to have the ability to rap. It was a very silly hook and definitely not one that I would have chosen to be in the top. 2nd place was Sonyae whose super power was the power to control herself and not let her emotions get the best of her – to have a heart of steel. And winning was my fellow software engineer Johnny, who wrote about having the ability to walk through walls.

Teams were picked – Johnny, Scotty & Jes; Sonyae, Nick & Melissa; Jackie, Brian & Amber. They had the remainder of the day to create their songs. They also had to incorporate another genre into their raps to make things a bit more challenging.

Scotty came up with the idea to infuse some opera in to Johnny’s song, Sonyae and Nick worked on a rock aspect with their rap and Jackie’s group did some doo-wop. Ultimately, the 3 songs came in the same order as their hooks and someone from Jackie’s team would be going home. The judges felt that Amber did not contribute enough to the song and she has left us. (Much to the upset of Nick – who thinks she is good looking and that Jackie should have gone home based on looks alone. He’s such a sweetie, isn’t he?)

There was also a lot of drama – Scotty felt a bit like a third wheel when Johnny and Jes being all lovey-dovey. Everyone still hates Nick. And Scotty told Jackie how everyone felt about her which led to a HUGE blow up amongst the contestants. But without all this drama the show would not be half as entertaining as it is.

It is interesting to me that week after week it seems to be the contestants I know nothing (or very little) about that are going home. Is the editing featuring other contestants more? Or are these mediocre contestants just laying low and trying to ride coattails? I’m not sure.

In February of 2010 I purchased a John Mayer journal at his show.  At first I wasn’t sure what to do with it, but then I quickly decided I would use it to keep track of the setlists of all the concerts I had gone to.

I went back through reviews and did searches to try and come up with all the setlists I needed (some are still missing) and thought that I would NEVER fill the book.  Not that it is huge, but it just seemed like filling it would be a long way off.

However, Friday night’s show marked the filling of the book! Wow!  I had purchased a Paul Frank Julius journal to use once this one had filled – it is appropriate because Julius is playing the guitar on the cover.

I am looking forward to filling another book starting later this evening when the first concert written in it will be Honor Society at the Gramercy Theater. 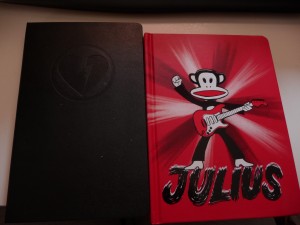