Last night we found out who from Adam and Cee Lo’s team would be advancing.  It was kind of strange because all of them had to prepare a song for this week, but 4 of them ended up going home and didn’t get to perform it.  This is probably why there will be a results show on tomorrow and a finale results show next week.

From Team Cee Lo, America saved Vicci.  Cee Lo saved Nakia.  My picks are 6 for 6.  From Team Adam, America saved Javier and Adam shocked me by saving Casey.  What?!  Although 7 for 8 with my picks ain’t bad 😉

Up first  from Team Christina was Frenchie who sang Madonna’s “Like A Prayer” I thought she did really well with it.

Nakia did Adam Lambert’s “Whatya Want From Me” and slowed it down a bit.  Adam (Levine) said he had never heard the song before.  Apparently Adam doesn’t listen to the radio… ever.

Dia sang REM’s “Losing My Religion” and was great.

Casey butchered I Will Always Love You.  Really not sure why she is in the competition but at least it is less competition for Javier!

Beverly sang The Thrill Is Gone and did really well with it, but I still think I prefer Frenchie over Beverly.

Javier did an amazing rendition of Coldplay’s Fix You and he took off his hat! *gasp*!

Xenia did The Script’s The Man Who Can’t Be Moved and once again Adam didn’t know the song.

Vicci closed out the show with a very high energy performance of Florence and the Machine’s Dog Days Are Over.

Maroon 5 and Christina Aguilera debuted their new song “Moves like Jagger” and Blake Shelton performed his latest single, “Honey Bee” and was joined by Dia and Xenia.

Voting closed at 10am this morning… I got in 10 votes for Frenchie, Vicci, Javier and Xenia via NBC.com, 10 call in votes for Javier and an iTunes vote for Javier and Vicci. One from each team will move on during tonight’s live show.  The coaches got 100 points to split between their team and America’s votes will be weighed the same as the coaches.

It will be interesting to see if America chooses the same 4 to advance as they did in the earlier rounds.  I am thinking that they will, but I’m not sure if they will tell us who specifically America picked or if we’ll just know the grand total with the coaches votes as well.  My picks are Vicci from Team Cee Lo, Javier from Team Adam, Frenchie from Team Christina and Xenia from Team Blake (although Team Blake was the hardest for me to choose, so I wouldn’t mind if Dia made it through instead)

Next week is the finale of the show!  I’m sad that it kind of went so quickly once we got in to the live performance rounds!

The winner of the signed Ashlyne Huff CD is comment #8, Lauren!  She has been emailed and will have 48 hours to respond or a new winner will be chosen.

Thanks to everyone who entered 🙂 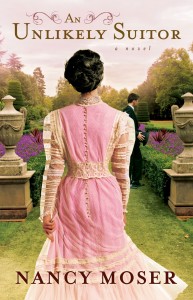 I have to start of this review by saying – I loved this book!  I read almost all of it the first day I started it – and if the day had more hours in it I probably would have finished it all in one go.

The story is about Lucy Scarpelli, a seamstress whose family is being evicted from their home.  Her aunt and uncle decide to move from New York to Oklahoma, leaving Lucy and her mother and her sister to figure out on their own a place to live.

Lucy manages to find a man that not only will rent them an apartment, but will also give the three ladies jobs as seamstresses and hat makers at his dress shop!  While working in the shop, Lucy meets Rowena, a woman of high society who needs dresses made so that she can court with Edward.  Edward and Rowena’s parents want them to marry each other although Rowena is not sure anyone will want to marry her because she is “crippled” (She hurt her hip/leg in an accident and walks with a limp)  Rowena goes along with her parents idea even though she is really in love with Morrie – but he is part of “the help” and therefore off limits for her to pursue.

Rowena quickly forms a friendship with Lucy, as Lucy discovers a way to make her dresses quite flattering on Rowena.  When Rowena and her family head off to Newport, RI for the summer, Rowena rips apart her dresses and demands that Lucy come out right away to repair them.  While there Lucy meets “Dante”, who saves her from the Cliff Walk when she fell.  Lucy and Dante sneak out to meet each other and send letters to each other.

Meanwhile, several of the other ladies want Lucy to help make them costumes for the Vanderbilt’s ball, so Lucy’s mom and sister are brought in to help with making them.  It seems like once everyone is there – everybody starts falling in love and the story takes some twists and turns! I won’t give any more away 🙂

I liked that at the end of the book the author included a “Fact or Fiction” section where she discussed how things were in the late 1800s and how she decided to pick and choose where people lived, what their apartments looked like, etc.  This was a nice touch and was very interesting to read after I had finished the book.  She also included some photos of typical outfits for the women in this time period so it made it a bit easier to picture what Lucy was creating and what the women of high society were wearing during the book.

I was given a free copy of this book from the publisher in order to do a review.  All opinions are 100% mine and I was not compensated in any other way or asked to write a positive review.