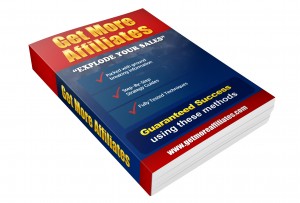 If you are selling any sort of product on the internet – it might be a wise decision to also set up an affiliates program.   Your affiliates advertise your product on their website and in return, for each sale that is made through their website, they get a percentage of the profit.  In theory, you’ll be making more money by having your information out there on various other affiliates sites and your affiliates will keep your link up because they are making money too.

But how can you create an army of affiliate to basically do the work for you when it comes to selling your item?  Look no further than reading  Get More Affiliates.  The book breaks down how to get affiliates, how to turn your customers into affiliates and several websites that can not only sell you product – but does all the work splitting the profits between you and your affiliates!

The book really breaks down everything you need to do and research in order to become successful selling your product(s) via affiliates.  It also contains screen captures of the websites which makes it a lot easier to know where you should be looking on the websites for the information that you need, without wasting precious time!

I received one or more of the products mentioned above for free using Tomoson.com created by WebBizIdeas.com. Regardless, I only recommend products or services I use personally and believe will be good for my readers. I am disclosing this in accordance with the Federal Trade Commissions 16 CFR, Part 255 Guides Concerning the Use of Endorsements and Testimonials in Advertising. Tomoson Product review & giveaway Disclosure.

First up were the Thompson Girls. I am not really a fan of theirs and didn’t really dig their performance of Boogie Woogie Bugle Boy.

Casey’s performance of Horse and a Cherry Tree was alright…

Vicci’s performance (Jolene)  completely rocked. I really like her.  But how tall is she?  I didn’t think Carson was all that tall and he made her look so tiny! lol

Devon did a great One Republic song Stop and Stare. I really like his voice!

Nakia did Sex On Fire.  I thought he did well with it, although for some reason I don’t really like him. But I will be pretty shocked if he does not advance next week.

Jeff Jenkins went for Carrie Underwood’s Jesus Take The Wheel.  I think his nerves and/or emotions got the best of him and it was not as good as I would have expected from him. (He is a favorite in the house)

Curtis did Addicted To Love – a country version of it.  I liked that he took the initiative and switched the song up and made it his own… but I still just can’t get into country!

And once again we had some very entertaining performances from the coaches with their teams!

Advancing for Team Blake is Dia and Xenia.  4 for 4!

My Predictions of who will be advancing this week  are Team Adam: Devon & Javier.  Team Cee Lo: Vicci & Nakia.

Next week we go in to the semi final rounds.  Carson said that 8 will perform, so I guess 4 will prepare a song and then not end up performing it?  That should be interesting and add an extra emotional element!