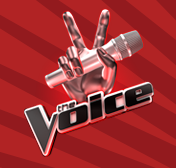 Last night, The Voice premiered on NBC, finally! If any of you watch NBC even semi regularly, I am sure you are all well aware of the fact that this show would be starting up since they played commercials for it constantly!
For those of you who aren’t familiar with the show, there are 4 coaches and contestants have a “blind audition.”  The coaches have their backs to the contestants so what they look like or are wearing doesn’t have anything to do with if they are picked or not – it is strictly on their voice.  The coaches (not judges!) are Adam Levine of Maroon 5, Cee Lo Green, Christina Aguilera and Blake Shelton. They will each have a team of 8 singers. If the coach likes what they hear, they hit a button and their chair turns around.  If only one coach turns around, then the singer is automatically added to their team.  If more than one coach turns around, then the contestant gets to choose which team they would like to be on.  It is fun to see the coaches interact and tease each other when trying to get contestants to choose them.
I am not really familiar with Blake (he’s country, so that explains it) but I love Adam, Cee Lo and Christina.  That is what first made me want to watch the show, but I am actually enjoying it. I wasn’t sure it would live up to all the hype – I swear there was a commercial for it every commercial break during any NBC show I watched for the past week.  (Not to mention during The Biggest Loser there was an icon of “The Voice in 59 minutes!” in the corner of the screen.)
Frenchie Davis who was kicked off of American Idol for being a lingerie model auditioned and is on Christina’s team, so I am really excited to see her again and I hope she does well.  Some have been mocking saying that “her sob story is American Idol” but I didn’t think what Idol did to her was fair at all so I am glad to see she is getting a second chance of sorts.
I also liked Javier Colon – who is from Connecticut! So he definitely gets bonus points for that, but he is a great singer as well.  Apparently he also opened for Stephen Kellogg and the Sixers, but unfortunately I did not catch any of the shows where they were together.  Bummer!
I am still not entirely sure how these teams are going to work, and the previews said that once they have their teams they have to cut them down to only 4 contestants… so it will be interesting to see how it all will play out.