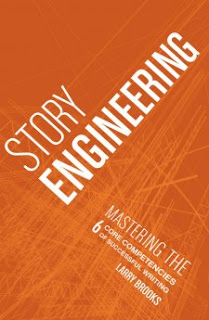 Story Engineering Mastering the 6 Core Competencies of Successful Writing by Larry Brooks is a great guide for anyone who is looking to write a story.  It breaks down all the items your story needs to have in order to be successful.

The book tells you what the 6 Core Competencies of Successful Writing are and describes each of them, in detail, so that your story will be evolved and involved enough to keep people’s attentions.  He also provides examples in movies and books where the competencies are used (either properly or unproperly).  Fortunately for me, I knew most of what he was referencing, though he does explain enough I would think so you can understand the point even if you had not read the book or seen the movies.

For the past 2 years I have participated in NaNoWriMo (National Novel Writing Month) and while I have completed the word goal of 50,000 words, my stories aren’t quite finished.  In 2009 I just threw an ending together to hit my word count and in 2010 I hit my word count and then just stopped writing, even though another chapter or two is probably needed to actually provide closure to the story.  However, before NaNoWriMo 2011 starts, I am going to re-read this book and I will be prepared to not only reach my word count but have a story that might be published worthy! I will have the whole story mapped out and once I know where the story is going and I am not just flying by the seat of my pants, I should have something that I’ll actually be looking to share. 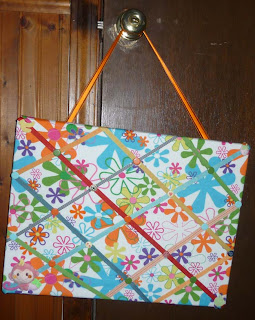 For those of you who are unfamiliar with a French Memo Board, it is a board with ribbons crisscrossed on it so that you can tuck your memos underneath them to hold them in place rather than tacking them to the board.  I am not sure why this makes it “French”, though there must be an explanation.

I took a trip to JoAnn Fabrics.  I already had a TON of ribbon in my scrapbook stash and I figured I could come up with plenty of brads and or buttons to use where the ribbons criss cross as well. All I would need was a foam board or a canvas and some fabric.

First I found foam board.  I got a piece that was 20×30 (there weren’t many other options).  On my way to the fabric, I found a few that were pre-made for sale!  They were $19.99, but I wasn’t a fan of any of the fabric choices they had.  One was alright and I figured if I couldn’t find something I LOVED in the selection of fabric, I’d settle on it.  But JoAnn’s has a TON of fabric and it was no problem to find something really awesome.  I got a print that seemed very 70s and had bright oranges and blues among other colors and I knew that HAD to be the one, even though I looked around for about 10 more minutes just to be sure.

For $9 ($3 for the foam board, $6 for a yard of fabric) I was going to make my own customized version.  I would be saving myself about $10 and I would be using up some of my ribbon  (I seriously have so much it is INSANE, especially since I rarely use it in my scrapbook layouts)

When I got home, I found the middle of the foam board, scored it with an exacto knife and broke it in half over my head. Seriously!  Then I hot glued the two pieces together so that my board would be a bit thicker.

Then I had a bit of a mishap cutting the fabric.  I think I was channeling my inner Tim the Tool man Taylor and threw the idea of “measure twice cut once” out the window.  Fortunately I did not screw up TOO badly and I still had enough fabric left to cover my board.  (HOW I tried cutting a straight line up and down and ended up cutting the fabric diagonally, Ill never know!)  I also had to iron the fabric so the crease in it would not end up being seen on my board.

Using a stapler, I stapled the fabric to the foam board. Then it was time to go through my ribbons and figure out which ones looked good with the fabric I had and lay out how I wanted it to look.  I am not going to lie, this was the hardest part.  First I had every thing laid out, but then I realized I’d have to do things one by one or everything would be a mess.  I started by going diagonally top left to bottom right and top right to bottom left.  Then I tried to fill everything in from there, making sure the ribbons were in an over/under pattern and stapled them to the back.  If you look closely, everything is not spaced perfectly, but that’s ok!

Then was the fun part.  I got to stab through everything so I could put the brads in.  After I had them all in place I used the hot glue gun to make sure they wouldn’t fall out and also filled the holes on the back with hot glue.  (With the foam board doubled up, the brads were not long enough to fit through the whole board and then be secured)

The finishing touch was adding some fun stickers I bought at the Sanrio store to each of the corners!