April 4, 2011 by ConcertKatie No Comments 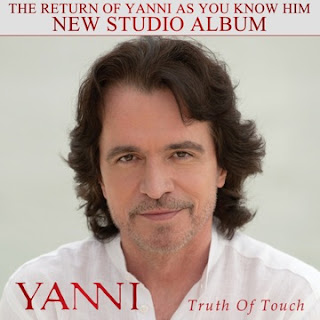 Truth of Touch is Yanni’s first instrumental release of original compositions in over eight years! Yanni is currently on tour supporting this release, so be sure to check out his website, http://www.yanni.com/tour/ , to see when he will be coming to a city near you!

The album is now in stores and I was given a free copy to review for all my readers at Concert Katie!  It contains 15 tracks.  Yanni is not an artist that I have listened to in the past, so I can not compare this album to any of his past releases. However, I really enjoy this new album.  The sound is refreshing and soothing, and it was not a distraction when I had it on in the background while trying to get work done. In fact, it seemed to even motivate me to get more done!

Each track has a unique sound, yet they all fit together well as an album.  Some of the songs do have vocals/lyrics (Can’t Wait, O Luce Che Brilla Nell’Oscurita, Secret) but still fit right in with the great instrumentals of the rest of the album.  Overall I would give this album 4.5 stars out of 5 and definitely would recommend that you check it out.


I received a copy of “Truth of Touch” for free to review from One2One Network, I was not otherwise compensated. All opinions expressed are my own.

Classical Concerts 101: Why You Might Enjoy One More Than You Think

Jennifer (Miss Mnemosyne) is a 20-something nerd/artist from Oklahoma on a perpetual quest for the simple (and not-so-simple) joys in life. Check out http://missmnemosyne.blogspot.com/ for her adventures, finds, thoughts and giveaways.

Many people shy away from the thought of attending a live classical concert, opera or other music event. Often this is because they don’t know what to expect, don’t feel they know enough about classical music or simply wouldn’t know where to start looking. This series of guest posts for Concert Katie’s Blog is geared towards music-lovers who would like to broaden their experiences and concert-going horizons.

You love concerts: the adrenaline, being surrounded by sound, the connection between the musicians and the audience, knowing that the exact music you’re hearing is unique because it is live, etc.

Just because a concert is “classical” doesn’t mean all this goes away. Here are a few reasons why you might enjoy a classical concert more than you might think:

Not all composers are 100-year-old Dead Guys

Classical music is a living, breathing genre just like any other. People are still composing and their works are still being played. New types keep springing up, and then later are enveloped into pop culture: jazz, for
example, is considered a classical art form. Even the more “conservative” genres keep getting new spins: there’s a new opera commissioned by the Royal Opera House in London over the life and times of Anna Nicole Smith and another composed entirely of tweets (the Twitterdamerung).

Not all concerts are in stuffy, quiet halls


Lots of classical groups are doing outdoor concerts now. I know our local Philharmonic does plenty of shows outdoors during the Summer.

You probably know more classical music than you realize

It’s everywhere. Even if you don’t know their names, you could probably recognize tons of classical pieces with just a few seconds of listening Don’t believe me? Test yourself! Check out Kick Ass Classical’s youtube channel – they have 10 videos with short clips from 100 famous pieces. http://www.youtube.com/user/kickassclassical

It’s not all top hats and coattails

While you may want to dress up a little for some events, you don’t need to wear special clothes for most concerts. Classical music fans are normal people too.

Classical concerts can be free or cheap entertainment

While you may have to spend the big bucks for prime seats at the Met, most local classical events come with either modest or no cost. Inexpensive date night anyone?

If you’re serious about music, you should have at least some exposure to its roots. Like guitar shredding? Go listen to some Bach and hear some crazy modulation and scale work. Like crazy rhythm schemes? Go find some “Bebop” jazz. Like subtlety and the fine art of the gradual build-up? Check out minimalism.

You’re not going to like everything you hear, but if you take the time to delve into what’s out there it can open another level of musical tools to you.

You like it loud? Want to feel the bass?

Hearing loss is a common problem among classical musicians because classical music is designed to fill huge halls without amplification. In some settings (outdoors, for example, or in jazz groups with electric instruments) amplification is used, but usually having a hundred or so instruments playing at once can give a pretty good amount of sound.

You liked it when Bugs Bunny did it – Operas are great entertainment, and you don’t need to speak a foreign language

Opera was the sex, drugs and rock ‘n roll of Europe for several centuries. Tabloid-worthy celebrities, racy plots, extreme drama, hilarious comedies – this is what people did before movies. I dare you to go watch a good opera and not be blown away. You can also catch plenty of shows in English or, with today’s technology, they’ll just project translations above the screen so it’s like watching a movie with subtitles.

Interested yet? In the future I’ll be posting guides for finding and attending live events, music you might want to know and other classical-type concert info.