What public scandal such as Roswell, Kennedy Shooting, Agent Orange, etc do you question?
After watching “Wag The Dog” several times in Journalism classes, I tend to question almost everything and its timing.

2. RADIO FREE EUROPE “Radio Free Europe, radio free europe, calling out…”
Have you ever used a shortwave radio or listened to another country’s radio broadcast?
No I have not. But I have listened to recordings of Hanson interviews from Australia. If that counts lol

What would you eat if you knew it was the end of the world soon?

Probably everything in site.
4. LOSING MY RELIGION “Losing my religion, and I don’t know, oh no I’ve said too much…”

Have you ever said something to someone that was negative about a religion only to find that person was of the faith you were speaking about?
I try not to speak out about religion unless I’m at home.

Have you ever gone skinny dipping at night, or night swimming in a lake, pond, river, beach, pool?
Nope

Is there a song you hear that reminds you of someone in your past every time you hear it?
Absolutely. Several songs, different people.  Also a lot of times if I hear a song it takes me back to the first time I heard it

7. STAND “Stand in the place where you work, now face west…”

What was the last childhood game you played as an adult?
I’m not sure.

8. EVERYBODY HURTS “Everybody hurts, everybody cries, sometimes, sometimes everything is wrong…”

What is wrong right now?
There is not enough room on this blog for what is wrong! But I’ll be a bit happier if I can knock out some more of my massive to-do list for this weekend.

Where will you never go back to?
I don’t know that there is anywhere I will NEVER go back to…

11. SOUTH CENTRAL RAIN “Did you never call? I waited for your call…”

What was the last call you were waiting for?
From a job!

What was the last thing you said about the weather and the government?
I think the last thing weather related I said was whining about it being cold.  I’m not sure what I last said about the government though. Might have been going off on one of my rants of things I would do if i was president – like get rid of curbs. Or making the work week shorter. 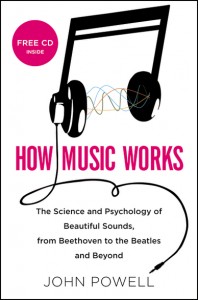 What makes a musical note different from any other sound? How can you tell if you have perfect pitch? Why do 10 violins sound only twice as loud as one? Do your Bob Dylan albums sound better on CD or vinyl? John Powell, a scientist and musician, answers these questions and many more in HOW MUSIC WORKS, an intriguing and original guide to acoustics. In a clear, accessible, and engaging voice, Powell fascinates the reader with his delightful descriptions of the science and psychology lurking beneath the surface of music.

I won the book How Music Works by John Powell from Just Another New Blog in January and have finally gotten around to reading it!  I was really excited when I won the contest since being an engineer and music fanatic (though believing I had no musical skill whatsoever) I thought this book would be interesting.  And it was!  My only “negative” thought was that sometimes the chapters seemed to be a bit too long.  I often read before bed so I would finish a chapter and just not want to continue on to another if it was going to be as long as the one I had just finished.  Or it could just be I picked the book up when I was already too tired to be reading.

The book had a few things I had already known from Physics classes and hearing things here or there, but it also had a lot of fun tidbits in it that I did not already know and I am wowing my friends while we wait for concerts with my musical knowledge! 😉  I was sad to find out that perfect pitch most likely can not be learned after the age of 6. I don’t know why, but that was something I was hoping I could train myself to do. I suppose there is still a chance it can happen though, so I won’t give up hope just yet.  However, I learned it is not too late for me to learn to play an instrument.  Although, considering I tried this in elementary and middle school with less than stellar results, I’m not sure I’ll be picking up a guitar or anything else any time soon!

Also included with the book was a Free CD with examples from the book such as: How To Get Different Sounds From A Guitar String, Can You Guess What Instrument This Is?, Different Ways to Accompany A Tune, The Horrible Out-Of-Tune Bamboo Whistle and How to Bring Tears To The Eyes Of The Audience among others. (10 tracks in total)

One of the great things about this book is that you don’t really need to read it all at once.  You can read a chapter here and there while reading other books (I read 2 or 3 other books in the middle of reading this book – something I hardly ever do because I tend to get stories confused) or just whenever you are looking for random facts about music to impress your friends with!