September 25, 2009 by ConcertKatie No Comments 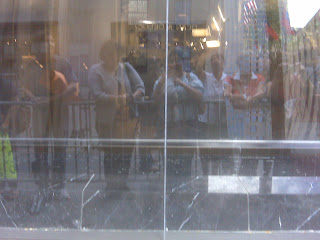 Today show went rather well. I woke up a little after 4 to get ready. Lauren showed up around 5 and we took the 5:22 train in to the city.

We got to the plaza and got a spot in the pen. Al Roker came over and shook everyones hands and said hello. Matt and Meredith came out but stayed to the other side of the pen.

I spotted one of the guests leaving and we hoped we'd see john krasinski leaving but no such luck.

Al came over and talked to the family that was next to us so I am pretty sure I was on TV but of course I only set the recorder for 1 hour!!

At 9 a bunch of people left and we moved to the other window. Of course then HS comes out the door we were watching all morning but moved away from! They came down briefly for the interview with extra and went back inside.

We saw them performing a check or prerecord for the coming up next spot. Then later they performed for real. Unfortunately we had no sound, but the fans sang along anyway! (The guys didn't know we couldn't hear)

Then we waited for them to come outside. They went downstairs but shortly after came back and we got to talk to andy for a bit.

Then their manager had us say 'honor society rocks mtv no duh' and I was right by mike so I can't wait for that to be online!

Now we're on the train home! Can't wait to get back to bed.
Sent via BlackBerry by AT