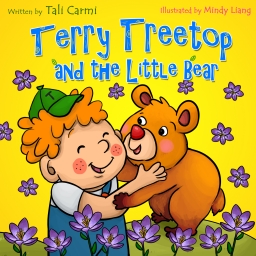 This is another book with Terry Treetop – the boy who got his name because he likes to climb to the top of trees and look around. In this book, it is the first day of Spring and Terry is very happy about that. He sees a bear cub walking around and then sees that it got stuck in a hole. Terry decided to go and find a ladder to help the bear get out. The cub’s mother was nervous about Terry because he was a human but realized that it was him who saved the cub and that children can be trusted. Terry ended up naming the cub Barry Treetop because he likes to climb trees, just like Terry!

International Best Seller children author Tali Carmi has a new book :
Terry Treetop and the Little BearBook Description :
Want to take your kids on a spring adventure?
“March 21, the first day of spring!Wonderful things this day will bring.”
In this book, Terry Treetop is about to play with a little bear that came into his back yard, when the bear’s mother calls him back to the woods. But something went wrong and the little bear was in danger.
Will Terry be able to save the little bear?
Will they play together after all?
This beginner reader’s eBook, the 5th in the Terry Treetop best sellers series, will teach your child about the signs of spring, and bears that leave their den in this season.
Your kids will enjoy full-color illustrations of Terry and the bear cub. This book is written especially for you and your kids aged 2- 8, with simple text and 17 colorful illustrations.
The story is suitable as a read aloud book for preschoolers or a self-read book for beginner readers.