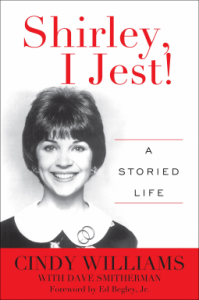 Shirley, I Jest, is written by Cindy Williams who is better known as “Shirley” from Laverne & Shirley.  I found it interesting that as an actress she is bad at lying (there is an excerpt in the book about quitting her job by lying and saying she broke her arm) yet I always thought that acting was mostly lying – but I guess not! She also mentions a story where she is working as a waitress and Jim Morrison comes in – and is in on a joke with her coworkers to mess with her! Some hazing at a new job! Overall there is a lot of fun stories in the book – some superstitious like getting a job on Room 222 on November 22 when she had just turned 22 on August 22…  At the halfway point in the book there are some photographs of Cindy and her family. The second half of the book focuses more on her time on Laverne & Shirley, her friendship with Andy Kaufman and some encounters with celebrities.

Overall this was a fun read and fun to find out more about Cindy and her life before and after she was Shirley. I received an e-copy of this book in exchange for this review.

Cindy Williams, best-known as half of the comedic duo of Laverne & Shirley, has had a wild and lively career in show biz. After spending years waiting tables, she landed her first big break with a role in American Graffiti as Ron Howard’s long-suffering girlfriend. This book is an engaging and heartfelt journey from Williams’s blue collar roots to her unexpected stardom—from being pranked by Jim Morrison at the Whisky a Go Go to the emotional rollercoaster of celebrity.

Cindy Williams is an actress and comedian who has starred in some of the most notable movies and television programs in entertainment history. Her career began in the 1970s in prestigious movies like Travels with My Aunt (with Maggie Smith, directed by George Cukor) and American Graffiti (with Ron Howard, Harrison Ford, and Richard Dreyfuss and directed by George Lucas). Williams is now focusing on theater, and has performed in shows across the country, including the musical Nunsense. She lives near Palm Springs, California.