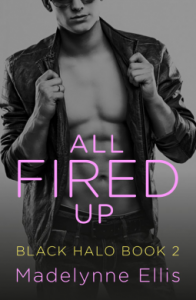 All Fired Up is about the band Black Halo and specifically Ash and his girlfriend Ginny who he is trying to keep a secret. This is the second book in a series. I didn’t read the first one but I didn’t find that I had any trouble because of it (the first was about bandmate Xane and his girlfriend Dani).

I love Rock Star romance novels, but this one took me a bit longer to get through than usual, but I can’t really put my finger on why.  The scenes between Ash and Ginny were great but I think I could have done without all the drama between the band members (and Ash probably could too).  It just seemed like too forced that everything was setting up for Ash and Ginny to fail.

I give it 3/5 stars. I wasn’t a fan of the lack of an end either – but that was probably because it had to set you up for the next book in the series.

Ginny Walters always knew her weakness for bad boys would get her into trouble. Her one night stand with Black Halo’s lead guitarist, Ash Gore, was only supposed to be a fun, not the prelude to the sort of relationship that’d scorch holes in her heart as well as her bed sheets. She’d be the happiest woman in the world if Ash wasn’t so determined to keep their connection off radar.

Ash Gore knows girlfriends are bad news for bands, which is why he’s resolved to keep his attachment to Ginny a secret. He and the guys have enough on their stages as they try to piece themselves back together after the band’s split. But when new drummer, Iain Willows, starts taking an active interest in Ginny, tensions quickly mount. Soon, Ash is not only at risk of losing Ginny, but everything he holds dearest—including life itself.