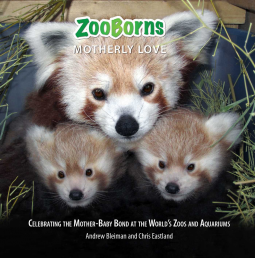 Zoo Borns, Motherly Love, Celebrates the mother-baby bond at the world’s zoos and aquariums.  A portion of all proceeds from ZooBorns book sales goes directly to the Association of Zoos and Aquariums Conservation Endowment Fund.

If you love animals and especially baby animals (and really, who doesn’t?) you will certainly love this book. It is full of adorable pics of Mommies and their babies.

An adorable installment in the ZooBorns series, ZooBorns Motherly Love celebrates the special bond between exotic animal mothers and their babies from every corner of the globe: “Animal babies make conservation cute,” raves The New York Times.

ZooBorns Motherly Love is all about mothers and their babies. Photographs that capture the power of a mother’s love consistently attract explosive interest on the wildly popular ZooBorns website, and now, for the first time, they have been collected in this book. ZooBorns Motherly Love explores the special role mothers play in our lives: they do more for us than they do for themselves, worry about us more than we’ll ever know, and love us more than anyone else can…no matter their species. By highlighting these adorable and recognizable moments, from a sea otter cradling her newborn pup to a lioness gently tugging her cub back to her side, ZooBorns connects you to the animals featured here and builds awareness for the challenges these species face in the wild. Remember, these babies are much more than just irresistible furry faces. They are ambassadors for their species, helping educate about conservation while they entertain. In fact, 10 percent of all ZooBorns’ revenue from the sale of these books goes directly to the Association of Zoos and Aquariums’ Conservation Endowment Fund.

This book is sure to put a smile on your face and warm your heart. 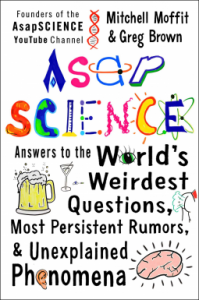 ASAP Science contains the answers to the world’s weirdest questions, most persistent rumors and unexplained phenomena. The book answers a lot of questions that I’ve heard before like – does shaving make your hair grow thicker? Are silent farts more deadly? Is Binge watching TV bad for you? (Maybe I haven’t heard that one but I wonder that one since I do it!), Is there a hiccup cure?, Why do we get Pins and Needles?, Why does time feel faster as we age?, Should you use the snooze button? and many, many, more.

The book presents these scientific mysteries in fun and easy to understand ways – and there are even drawings and pictures throughout to help illustrate the points! I found it to teach me a lot and be a lot of fun to read in the process as well. If you’re interested in science or the weird things that we deal with with our body, sex, farting, etc. Definitely check this book out.

From the creators of the wildly popular and seriously scientific YouTube channel, AsapSCIENCE, comes entertaining, irreverent, and totally accessible answers to the questions you never got to ask in science class.

Why do we get hung over? What would happen if you stopped sleeping? Is binge-watching TV actually bad for you? Why should I take a power nap? In their first-ever book, Mitchell Moffit and Greg Brown, the geniuses behind YouTube channel AsapSCIENCE, explain the true science of how things work in their trademark hilarious and fascinating fashion.

Applying the fun, illustrated format of their addictive videos to topics ranging from brain freeze to hiccups to the science of the snooze button, AsapSCIENCE takes the underpinnings of biology, chemistry, physics, and other hard sciences and applies them to everyday life through quirky and relatable examples that will appeal to both science nerds and those who didn’t ace chemistry. This is the science that people actually want to learn, shared in a friendly, engaging style. And in the spirit of science, no subject is taboo. Amid the humor is great information and cocktail conversation fodder, all thoughtfully presented. Whether you’re a total newbie or the next Albert Einstein, this guide is sure to educate and entertain…ASAP. 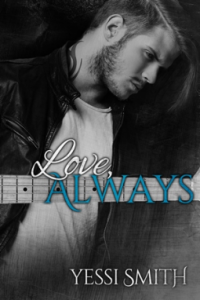 Love, Always is about Dee – 19 years old and pregnant.  When she tells her boyfriend, Josh, drummer for the band Wasted Circle – a band that is about to become HUGE – he proposes to her.  Except during their first big headlining show there is an accident and Dee is left alone.  Adam – Josh’s best friend and bandmate – steps in to care for Dee, saying he will be the baby’s father and make sure that she is alright.

The story alternates between Dee and Adam’s perspectives and also flash’s back to Adam’s past.  When he was 6 years old his mother was pregnant with his baby brother. Adam and his Dad went to a gas station to get her chocolate (and him gummy bears) but when Adam was walking to the front of the store he saw a man with a gun.  When he tried to walk back to his Dad he tripped over a box and made noise so the gunman knew he was there.  His Dad rushed to his rescue but was shot and killed. Adam’s Mom lost the baby and Adam has been blaming himself this whole time.  He is also blaming himself over Josh’s death.

After baby Josie’s birth, Dee checks herself into a psych ward – she has been depressed her whole life but the death of Josh and birth of their baby has made things worse. Adam is there for her every step of the way – but he wants more.  Except that he isn’t sure if that would be betraying his best friend.  Dee might be interested as well but seems to be holding back for some of the same reasons.

This book was a quick read and I enjoyed it. It was classified as romance – but there was certainly a lot more going on than romance – which I didn’t find to be a problem, I enjoy a good plot (and plot twist) from time to time! 😉

I received a free e-copy of this book in order to write his review, I was not otherwise compensated.

**This book is intended for a mature reading audience and isn’t suitable for readers under the age of 17.**

In love with a man on the brinks of greatness, Dee has her life figured out. The love they share is comparable only to the love they feel when they find out Dee is pregnant. Josh and Dee welcome their future together with eagerness as they plan a wedding, baby, and the upcoming tour for Josh’s band Wasted Circle. Big things are finally happening.

During Wasted Circle’s first big show, tragedy strikes leaving Dee alone. The life she and Josh planned for ends up being nothing but desolate promises. Unable to watch his best friend’s girlfriend drown under her own despair any longer, Adam steps in to help Dee cope with her loss and the upcoming birth of her baby. Adam is patient, kind and unrelenting. He stands by her side, never faltering despite his growing desire to be more than Dee’s supportive shoulder and the idea that he is betraying Josh. He refuses to give up on Dee and remains loyally by her side even when she admits herself into a psychiatric ward and he is left to father Josh and Dee’s baby.

But even sweet and sturdy Adam has his limits.

Book Review: One More Minute With You 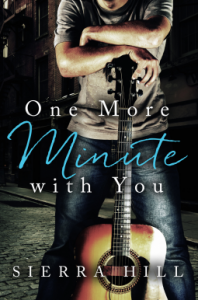 One More Minute With You is about Kenzie who has moved from Seattle to Nashville in hopes of finding a new life on her own as a musician. She is living in a cheap motel and working as a waitress in a diner by day and doing gigs by night. Then a guy, Remy,  keeps coming in to her diner to see her.  He overhears about her living condition and offers to let her live with him because his roommate is going on tour.

When they find that her hotel room has been robbed, she ends up taking Remy up on his offer to move in.  There is certainly an attraction between them, but Kenzie had a bad past relationship and doesn’t want to have anything to do with guys for a while.  Of course, when she and Remy touch she feels there’s a connection but keeps trying to push him away.

Meanwhile – Kenzie starts getting strange texts that seem threatening from a number she doesn’t recognize and Remy’s Dad – a famous musician – is in town and wants to see him.

I thought that the romance aspect of this was good – I mean, typical storyline but I enjoyed it. The extras seemed to be a bit too much. I think that it either should have been Remy’s Dad drama or Kenzie’s text drama and not both. (Or maybe save the other for a later book)  But overall it was a quick read and I did enjoy it.

Seattle is in the rearview mirror and Kenzie Daniels wants to start a new life to pursue her musical dreams in Nashville. But it’s harder than she thought trying to make it on her own with no one to rely on but herself. Until a handsome customer shows up at her table and changes the course of her future.

Remy Martins wasn’t looking for anything but a good time and a creative outlet when he stumbled upon Hank’s Diner and discovered his muse. The moment he laid eyes on Kenzie, the beautiful waitress with a chip on her shoulder, he knew his luck had turned around. He’d been in a writing slump for months and she was the spark he needed, breathing new life into his lyrics. Now Remy is determined to have Kenzie and keep her in his life.

When a chance run-in at one of his gigs has Kenzie leaning on him for support, Remy is given the opportunity to make her an offer she just can’t refuse.

Just as their relationship morphs into something more, fueling a deep physical need that neither of them can deny, Kenzie’s and Remy’s pasts collide – threatening to destroy their bond along the dreams they’d hoped to fulfill.

Can Kenzie rely on Remy to be there when she needs him the most? Will both their dark pasts ruin their chances at a bright future?