Book Review: Song of the Fool 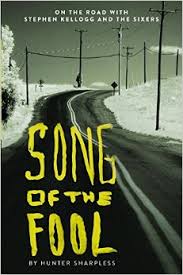 Song of the Fool was written by Hunter Sharpless, a college student who got to tour with Stephen Kellogg and the Sixers for 3 months in the fall of 2009.  I remember Hunter being on this tour and following him on twitter while the tour was going on.

The story is broken down into a chapter for each member of the band – Stephen “Skunk” Kellogg, Brian “Boots” Factor, Sam “Steamer” Getz, Kit “Goose” Karlson and the band’s manager Jessica “Cousin” Kellogg.  Due to this break down the chapters focus more on each band member in their own section so the stories are not always chronological.

As a fan of the band, I enjoyed the inside look at the “glamorous” life style on the road and how driving from show to show worked.  The band has just a van, not a bus, and they drive everywhere on their own in shifts.

If you want to know about life on the road for a great (now on hiatus) lesser known band – then this is the story for you – but if you’re looking for a sex, drugs and rock n roll expose like Almost Famous then this is certainly not the book for you.

I purchased this book and thought that it might be an interesting book to review for my readers. I was not asked to post this review, did not receive a free book nor was I otherwise compensated.

When nineteen-year-old Hunter Sharpless e-mails roots rock band Stephen Kellogg and the Sixers, he doesn’t expect a response. He wants to write a book about them. When his inbox chimes two hours later, telling him he has a chance to tour with the band for three full months, he dreams of groupies and Almost Famous. It doesn’t take long, though, for Hunter to discover that the road isn’t the electric collection of glories it’s often billed to be. He’s mistaken for a homeless person in Sacramento, thrust onstage in Iowa, and cradled against a toilet in New York. The road is hard. No cocaine, no backstage blowjobs, no sleek tour bus. But the Sixers see it differently. Stephen introduces Hunter to a more authentic perspective: behind the lights of the stage, after the glow of the performance, away from the noise of the amps. This is the world Song of the Fool begins to unravel.

“When considering this kid’s out-of-the-blue request to tour with his band, Stephen Kellogg asked Hunter Sharpless to explain ‘why it would be a good idea to bring an underage person