Toons in Toyland is the Story of Cartoon Character Merchandise.  The author talks about the toys he had as a kid and that he tried to buy back many of the toys he had as a kid that were donated by his parents in order to get his collection back again and house it in a museum.  The book talks about the history of toys made in the likeness of cartoon characters and throughout the book are photographs of the various toys. It’s fun to see how some of the older toys look compared to who they were supposed to be (in particular there is a photo of a toy of Barney Rubble with green hair!)  Even the costumed Disney characters are featured and I have to say I’m glad I wasn’t a kid in the early 60s. Creepy!

This book was fun to read, with a lot of great information included. (I found out some more about Tim’s museum at roadside america)

Every living American adult likely prized one childhood toy that featured the happy image of an animated cartoon or comic strip character. There is an ever-growing market for these collectibles, and stacks of books pose as pricing guides. Yet Tim Hollis is the first to examine the entire story of character licensing and merchandising from a historical view.

Toons in Toyland focuses mainly on the post–World War II baby boom years, circa 1946–1980, when the last members of that massive generation were in high school. During those years, the mass merchandising of cartoon characters peaked. However, the concept of licensing cartoon characters for toys, trinkets, and other merchandise dates back to the very first newspaper comics character, the Yellow Kid, who debuted in 1896 and was soon appearing on a variety of items. Eventually, cartoon producers and comic strip artists counted on merchandising as a major part of their revenue stream. It still plays a tremendous role in the success of the Walt Disney Company and many others today.

Tim Hollis, Birmingham, Alabama, has published twenty-four books on pop culture history. For more than thirty years he has maintained a museum of cartoon-related merchandise in Dora, Alabama. He is the author of Dixie Before Disney: 100 Years of Roadside Fun; Florida’s Miracle Strip: From Redneck Riviera to Emerald Coast; Hi There, Boys and Girls! America’s Local Children’s TV Programs, Ain’t That a Knee Slapper: Rural Comedy in the 20th Century, and, with Greg Ehrbar, Mouse Tracks: The Story of Walt Disney Records, all published by the University Press of Mississippi. 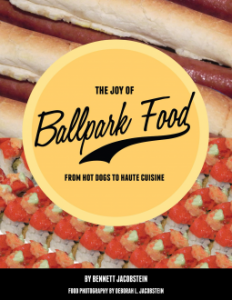 First and foremost I must mention that this book is being independently published and that all the royalties from the purchase of this book are being donated directly to the Second Harvest Food Band of Santa Clara and San Mateo Counties of California.  This book is available for purchase on amazon.

Lately ball park food is more than just the hot dog.  This book explores not only hot dogs but your peanuts and cracker jacks, the new food era and even concludes with a culinary tour of Major League Ballparks.

I didn’t realize that the original 1908 version of take me out to the ballgame was written about a girl named Katie Casey! In 1927 it was changed to Nelly Kelly. Interesting stuff.  There’s even a chapter on the official Cheese Doodle of the New York Mets!

Now that I’ve taken a virtual tour of all the ballpark’s food offerings – I think I know where I should be going for my next few games! (Atlanta for Waffle House and Cinnamon Glazed Pecans, Boston for a Whoopie Pie, Chicago Cubs for a Brownie, Chicago Whitesox for Mac & Cheese Bites and a Strawberry Churro, Cincinnati for a waffle bowl sundae, Cleveland for Fried Cookie Dough, Colorado for Loaded Tater Tots, Detroit for a bacon burger, Kansas City for some BBQ, Philly for a Cheesesteak, Seattle for a fried twinkie, & Toronto for poutine!)

It might be in your best interest to have dinner before checking out this book – but as the author says – you’ll be able to tour 30 ballparks and not gain a pound!

Loved this book and it was an interesting look at some baseball history!

Baseball is a game that is identified with food. We even sing about it at every ballpark during the seventh inning stretch: “….buy me some peanuts and Cracker Jack…” The famous song was written by Jack Norworth in 1908.

From the early part of the twentieth century until the 1980s, classic baseball fare consisted mostly of hot dogs, ice cream, peanuts, and Cracker Jack. Then ballparks slowly began to sell new items. A proliferation of new food offerings during the 1990s was fueled by the opening of twelve new major league ballparks.

Now, teams around the country sell a variety of exotic food as well as wide variety of hot dogs.

The Joy of Ballpark Food: From Hot Dogs to Haute Cuisine begins with the history of the first hot dog at a ball game and concludes with a culinary tour of all 30 major league ballparks. 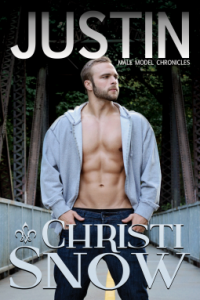 Justin is the first book in a series.  We first meet Tara who is in dire need of a cup of coffee. She’s loaded an app she created on her GPS system in her car and while a phone call tries to come through she gets distracted and ends up hitting a guy on the side of the road. He thinks he is dead and seeing an angel.  This is Justin. He’s a firefighter and male model and he immediately thinks Tara is a beautiful angel.

Turns out, he’s not dead and he just has two broken wrists. Tara goes to the hospital to see how he is doing and Justin is falling for her.  She ends up having him stay at her house so she can help him out while he recovers and can’t really use his arms due to casts.

Meanwhile, Tara’s boss is a capital B i-t-c-h and is super demanding.  When Tara decides to send a car service to pick her up so she can take Justin to the doctor, her boss (did I mention her boss is also her mom?) fires her!

Now Tara has moved in with Justin and accompanies him to one of his photoshoots. When the photographer senses the chemistry between the two they decide to do a shoot with Justin AND Tara for the book – and their relationship takes off from there…

This was a short book, under 100 pages, but I enjoyed it.  A bit strange of a way to meet – her hitting him with his car – but I actually have heard of people meeting boyfriends that way so I guess it’s not too far fetched. The two hit it off right away and I enjoyed the story. I am looking forward to future books in the series (which are apparently called Lance and Joshua.  NSYNC theme, anyone?)

Tara Malone is having one of those lives. Born to Oscar award-winning actor, Anthony Malone, and model-famous beauty, Veronica Scott, she should have it made. But her curvy figure and out-of-control frizzy red hair are just the start of her many, many issues. Now to make matters worse, she’s started out her week by running over model, Justin James, with her car. She had a lot of fantasies about the cover model, but never did any of them include vehicular assault.

Justin James doesn’t have time for two broken wrists, but neither does his over-achieving family. He can’t open up his fridge or unzip his fly without excruciating pain and no one else has the time to help him. Tara already shot him down at the accident scene, but maybe he can work this so that the curvy bombshell has a reason to hang around for a bit. He’s not above using guilt if it means he gets to know her better.

The first in a new series of novellas inspired by Shauna Kruse’s photography and her beautiful male models.

Disclaimer: The Male Model Chronicles, a new fictional series, is built around the real-life world of Kruse Images & Photography and the gorgeous male models that Shauna Kruse gets to immortalize in her photos. The heroes are real people who also happen to be male models, but every single other thing about the series is fiction. 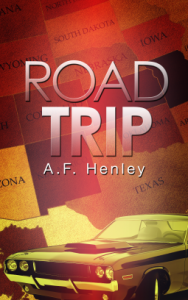 Road Trip is about Boyd, who has been saving up for the car of his dreams for as long as he can remember.  He finally finds the ’69 Road Runner at a price he can afford and he jumps at it and decides that he will go on a road trip with the car as he’s been marking off places he’d like to visit on a map for quite some time.  He starts in California and is trying to get the car back home to Syracuse, NY while missing the least amount of work as possible.

While in Vegas, Boyd meets a “kid” named Oliver who he for some reason feels a connection to (even after Oliver says he’s not hooking up with Boyd.)  Oliver wants to get home to Maryland so Boyd decides to take him along for the ride.

Despite a few set backs, Boyd and Oliver begin falling for each other and end up making it to Maryland a couple of days behind schedule – thanks in part to a “no regrets” speech that Oliver gives Boyd when he decides to just drive by some places on his list rather than stop and check them out.  When they get to Maryland, some bad guys are waiting for Oliver.

The two end up trying to figure out a way to make everyone happy… and then try to figure out how to get the two of them to end up living happily ever after.

Boyd and Oliver at first seem like an unlikely pair – Boyd is 35, Oliver is 24, but Boyd is a bit more “old school” than most 35 year olds. He has no cell phone, he doesn’t know what skype is, and he’s content listening to eight tracks in his ’69 car.  It is interesting to see the change that the two bring about each other over the course of their 7 day road trip (and then some.  The book follows the 7 days of the trip and then a couple of chapters afterwards jump forward in time a bit to finish the story)

For as long as Boyd can remember, he’s been pushing pins into a map. Carson City, Las Vegas, Albuquerque—all places he wants to see, for a dozen different reasons that wouldn’t mean a thing to anyone else. When he finally gets a chance to purchase the ’69 Road Runner of his dreams, at a price that even he can manage, Boyd jumps at the opportunity.

Oliver seems like just another kid with a broken dream when their paths cross in Vegas. Against Boyd’s better judgment, he offers to let Oliver hitch along for the ride when Oliver confides the need to get out and get gone.

But it’s not long before Boyd realizes Oliver’s reasons for running are more complicated—and more dangerous—than Oliver let on. But Boyd doesn’t like people who play hardball, and he definitely doesn’t like people messing with a man who’s managed to light a fuse that Boyd forgot he had.