April 7, 2015 by ConcertKatie No Comments 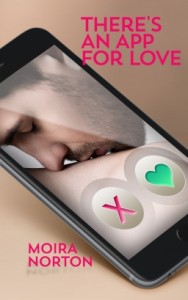 There’s an App For Love tells the story of two people living in New York – Liam and Liz.  Liam is a sex guru and was asked by his publisher if he’d consider writing about the new app “Flame”,  so he has his assistant download the app (Liam doesn’t even have a smartphone prior to this job!) and pick out someone who he can meet up with to see what happens.  Meanwhile, Liz is leaving New York soon to move to Signapore for her job.  Her best friend Jenny thinks that she should find someone on the new “Flame” app and starts looking for guys for Liz under her own account.  Liam and Liz are a match and agree to meet later that night.

Liam is essentially in love with Liz from the moment she walks through the door.  Since he is a sex guru, Liz is quite satisfied with him but doesn’t like that he seems to have no job but a lot of money and seems to be quite secretive.  Liz gets upset with him for being so secretive so he finally fesses up that he does have a job and it is to write the sex books which he writes under a pen name.  He also keeps getting vague phone calls that takes them away from his dates with her that he promises to explain but doesn’t.  Both have had a rough go with their past relationships (Liam’s wife tragically died on their honey moon and Liz’s ex was abusive) and have had time moving on.

But now that Liz is leaving for Singapore in 3 days, Liam wants to see her every night.  But he had mentioned that  he’d never want to leave the city.  Is this just a fling or is something more going on?

This book was 39 chapters and alternated between Liam and Liz’s point of view – which clued the reader in on all the secrecy going on that the characters were not otherwise privy to.  I thought that it was a good story – a bit of a rollercoaster at times but worth the read.

Can you ever find real love in a virtual world?

Liam Connor, the world’s most famous sex guru, is asked to write a book on Flame, a dating app that’s a lot like Tinder. Liam’s surprised at his publisher’s request. He knows a lot about sex. But he’s been a failure at both love and marriage. Certain he’ll never find true love, he signs up for Flame, only to see his world turned upside down…

Liz Andrews is a curvy, beautiful and intelligent technology executive, who’s moving to Singapore to head up sales for all of Asia. She’s not even thinking of dating — until her friend convinces her to have one last fling in New York…through Flame.

Sparks fly as soon as Liz and Liam meet and their passion knows no boundaries. Liam realizes that Liz is the true love he has been waiting for all his life. But Liz is hurting from a prior relationship. She needs time to build trust. But with only three days before she leaves New York, is there enough time for both of them?

As Liam and Liz find out, going from “Like” to “Love” is more than just hard…it’s nearly impossible.