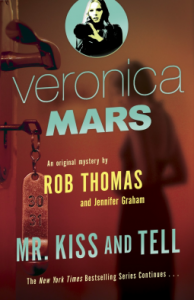 Mr. Kiss and Tell is the 2nd in the Veronica Mars book series!   In this book we are learning a bit more about the Weevil case (that was previously mentioned / seen in the Veronica Mars movie – so if you haven’t seen the movie you might want to check it out before reading the book!).  Then Veronica is hired by a hotel (over her Dad!) in order to prove to the hotel’s insurance that the man accused of brutally attacking a woman who was at the hotel was innocent so that they would not have to pay the insurance claim.

Veronica of course proves that the man is innocent – but then can’t stop there even after she is no longer officially on the case.  She wants to know who beat this girl so badly and makes it her mission to find out.  Meanwhile, Logan is home but may need to go back soon because a fellow pilot was killed.

Also – it may be time for Sheriff Lamb to be voted out of his position as he is finally not running unopposed!

A lot going on in this book but still a lot of fun and an easy read. It’s nice when you already know most of the characters from the show / movie and can hear them saying the dialogue in your head and picturing them.  Loving this series and hoping for many, many more to come!

In the second book in the New York Times bestselling mystery series, Veronica Mars is back with a case that will expose the hidden workings of one of Neptune’s most murderous locations.


The Neptune Grand has always been the seaside town’s ritziest hotel, despite the shady dealings and high-profile scandals that seem to follow its elite guests. When a woman claims that she was brutally assaulted in one of its rooms and left for dead by a staff member, the owners know that they have a potential powder keg on their hands. They turn to Veronica to disprove—or prove—the woman’s story.
The case is a complicated mix of hard facts, mysterious occurrences, and uncooperative witnesses. The hotel refuses to turn over its reservation list and the victim won’t divulge who she was meeting that night. Add in the facts that the attack happened months ago, the victim’s memory is fuzzy, and there are holes in the hotel’s surveillance system, and Veronica has a convoluted mess on her hands. As she works to fill in the missing pieces, it becomes clear that someone is lying—but who? And why?