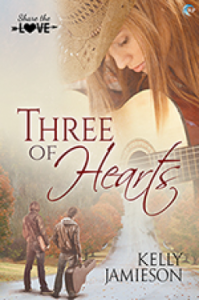 Three of Hearts is about a girl named Haylee who is in a band.  The tour is just coming to an end and it is about to be Christmas.  Before their last show she finds out that Doug, the guy she thought was her boyfriend, is now seeing a girl from American Idol that is more of a girly-girl than Haylee is.  Her band mates, Ben and Lucas, tell Haylee to channel the negative energy into their set.  At the afterparty she gets drunk and ends up asking Ben and Lucas for a threesome. The two agree and the next morning when she wakes up she wonders if maybe she made a mistake.  But once they get back to Nashville it happens again.  With Ben and Lucas set to leave for the holidays to see their families, Haylee worries if this change in their relationship will ruin their friendship or the band.

This was a quick and easy read, I read it in about an hour. I was actually surprised at how quickly the reading went, but didn’t feel like it left anything out of the story.  Twenty percent of all proceeds from the sale of this book will be donated to the It Gets Better Project.

Haylee Tremayne is tired of the road. The concert tour for Three of Hearts was a success, but she’s confused by the inexplicable tension between her bandmates, Ben and Lucas. She’s also ready to go home to her boyfriend in Nashville. Time off would probably help everyone relax, even if it is Christmas, a season with too many bad memories.

Back in Nashville, Ben and Lucas prove again and again that their first night wasn’t a mistake. But the tension between them is still high, and on Christmas Eve, their ménage takes a stunning turn. When it all falls apart, Haylee is terrified that their crazy relationship might cost them the band, their success, and worst of all, each other. 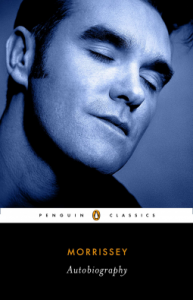 Autobiography is the story of Morrissey.  I liked that this book had pictures throughout, I didn’t like that it didn’t really have chapters.  However it was really well written and flowed well despite there being no real breaks in the book.  The book talks about his time with The Smiths as well as his amazing solo career and everything in between.

During his 26 years as a solo artist, Morrissey has had three number 1 albums in England in three different decades and has achieved eleven Top 10 albums (plus nine with the Smiths). His songs have been recorded by David Bowie, Nancy Sinatra, Marianne Faithfull, Chrissie Hynde, Thelma Houston, My Chemical Romance and Christy Moore, amongst others. In his autobiography, Morrissey details his childhood and young adult years in Manchester, the formation and split up of the seminal group the Smiths, of which he was a co-founder along with Johnny Marr and his life as a solo artist. Morrissey discusses his life in Los Angeles, where he spent several years, as well as discussing other cities he lived in, various tours and recording sessions.

It has been said ‘Most pop stars have to be dead before they reach the iconic status that Morrissey has reached in his lifetime.’

A #1 bestselling book for 5 weeks in a row in the U.K., where it broke the record for the fastest selling music memoir of all time, beating out Keith Richards’s Life.

Around the time when the kickstarter was going to get a Veronica Mars movie, creator Rob Thomas mentioned there was going to be a book series about Veronica coming out.  The first book is The Thousand Dollar Tan Line which I recently had the chance to read.  It picks up where the movie left off, so if you haven’t seen the movie but plan on it, I’d recommend watching it before you read the book.  If you don’t want to watch the movie first, you should still be able to follow along with the book, but may be spoiled if you want to go back and watch the movie later.

In this story, there is a missing girl that the city of Neptune hires Veronica to try and track down because there has been a tourism decline since her disappearance. She went missing while at the home of a drug cartel heir’s home, which of course gets Veronica suspicious.  Meanwhile, a second girl goes missing as well and it turns out that she is Veronica’s step-sister.  Despite the fact that Veronica hasn’t seen her Mom is years, she is determined to help her and her new husband (and son!) find the missing girl, Aurora.

Loved this book, love Veronica Mars and am looking forward to reading more and more in this series in the future!

I purchased this book for myself to read and thought that my readers would enjoy seeing a review. I received no free product and was not compensated or asked to write this review.

From Rob Thomas, the creator of the television series and movie phenomenon Veronica Mars, comes the first book in a thrilling mystery series that picks up where the feature film left off.

Ten years after graduating from high school in Neptune, California, Veronica Mars is back in the land of sun, sand, crime, and corruption. She’s traded in her law degree for her old private investigating license, struggling to keep Mars Investigations afloat on the scant cash earned by catching cheating spouses until she can score her first big case.

Now it’s spring break, and college students descend on Neptune, transforming the beaches and boardwalks into a frenzied, week-long rave. When a girl disappears from a party, Veronica is called in to investigate. But this is no simple missing person’s case; the house the girl vanished from belongs to a man with serious criminal ties, and soon Veronica is plunged into a dangerous underworld of drugs and organized crime. And when a major break in the investigation has a shocking connection to Veronica’s past, the case hits closer to home than she ever imagined.

In Veronica Mars, Rob Thomas has created a groundbreaking female detective who’s part Phillip Marlowe, part Nancy Drew, and all snark. With its sharp plot and clever twists, The Thousand-Dollar Tan Line will keep you guessing until the very last page. 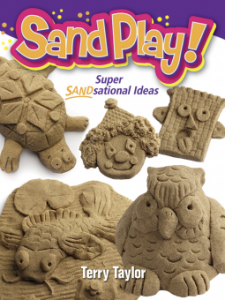 Sand Play is a book all about sculpting sand, which is a special kind of sand that doesn’t dry out and can easily be molded.  It is also quick and easy to clean up and is reusable.  The book separates the projects bu their difficulty – which are ranked by 1-3 stars.  There are 6 1-star projects, 7 2-star projects and  3-star projects and instructions in the book.  There is also a lit of tools and supplies that would be beneficial to have. (The book also recommends that if you use any tools from the kitchen that you then continue to only use them for sand and not bring them back into the kitchen to be used for eating so keep that in mind!)  Each project has step by step photo instructions.  I’d love to try to make the crab or the monkey featured in this book!

Sculpting sand is fun for kids of all ages — especially because the magical, mess-free material is easy to handle and can be used over and over again. This book features guidelines for using sculpting sand to create cute little creatures, including a crab, lizard, caterpillar, and monkey. Author Terry Taylor provides simple instructions and lots of colorful pictures for more than 18 projects, as well as plenty of helpful tips, including suggestions for tools and techniques.
Projects with one star are the easiest and ideal for beginners. Two-star projects are a little more complex, and the ones with three stars are the most advanced. Kids can build their sculpting expertise with simpler figures such as the clown, octopus, and butterfly and then move on to the frog, dragon, and peacock. Meanwhile, they’ll develop skills that will help them express their personal creativity.