Book Review: It Happened on Broadway

January 2, 2015 by ConcertKatie No Comments 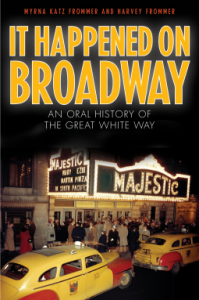 It Happened On Broadway gives the history of the Great White Way from WWII through the early 80s. The book is made up of stories from over one hundred theater veterans telling you about what went down – straight from the horses mouth.  The book starts, just like a playbill would, with a Who’s Who in the Cast – that is – whose stories are included within the pages of the rest of the book.

There are so many truly wonderful stories throughout this book that I can’t decided what ones to highlight for this review.  This must have been quite an undertaking by the authors, to put all these great chats with the performers together. I especially liked the chapter early on in the book where everyone talks a bit about what Broadway is to them.

If you are a fan of Broadway definitely check out this book – I’m not sure you’ll find a better one out there. So much history and detail and fun anecdotes!

In this deliciously revealing oral history of Broadway from World War II through the early 1980s, more than one hundred theater veterans—including Carol Channing, Hal Prince, Donna McKechnie, Hal Holbrook, Andrea McArdle, and Al Hirschfeld—deliver the behind-the-scenes story of the hits, the stars, the feuds, and the fiascoes. Along the way there are evocations of the great comedians and dramatic actors who had that indefinable magic that made them stand out above the rest. With verve, love, and passion, this book gives us the story of more than half a century of great theater—from the inside out.

Myrna Katz Frommer and Harvey Frommer met as undergraduates at New York University. The coauthors of five critically acclaimed oral histories, they are cultural historians with a focus on New York City. They are also professors in the Master of Arts in Liberal Studies program at Dartmouth College. They live in Lyme, New Hampshire. 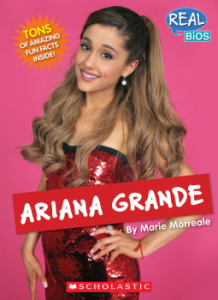 Ariana Grande is one of the biggest pop stars right now, so it is no surprise that Scholastic put out a biography about her.  (Although if you are a middle aged or older Big Brother fan you no doubt have no clue who she is – I guess you never listen to Top 40 Radio (or don’t pay attention to who sings what you’re listening to) and pay no attention to Disney or Nickelodeon!) Unfortunately, my review copy is only the first 2 chapters of the book and not the whole thing, but I will do my best to give you a full review just the same 🙂

The book is full of a lot of great details and a lot of great pictures.  There are 5 chapters – as well as several resources at the end of the book.  The first song that Ariana ever sang out loud was an NSYNC song while in the car with her mother. Her mom couldn’t believe it was her singing and made her do it again! There’s also a cute story about how Ariana did Karaoke on a cruise and Gloria Estefan was there and encouraged her to keep pursuing singing. There are special additions to the book such as a list of all of Ariana’s favorite things and a timeline of her life.

This is a super quick, fun and easy read from Scholastic for kids. I received a free e-copy of this book in order to write this review. I was not otherwise compensated.

With her starring roles on two Nickelodeon sitcoms and smash hit pop albums, Ariana Grande has become a major force in the entertainment world. Readers will find out how Ariana got her start on the stage of a Broadway musical, how she broke through to a huge audience on TV, what her day-to-day life is like, and what she plans on doing next. The well-organized chapters help readers identify key details while the photos add clarity and enable students to better understand the text. [Reinforced Library Binding.]

Hollywood on Tap is about a brewery run by the Sweets, specifically, Natalie.  Sean is one of the workers there and is hiding his past as a Hollywood Heartthrob from everyone there.  It seems that someone is trying to sabotage the brewery and meanwhile, Natalie has some ideas for the brewery she wants to go over with Sean, but he is doing everything in his power to avoid her.  Mainly because he can’t figure out if he loves or hates her (although, that will become quite obvious soon!)  Natalie ends up meeting Sean at his place to go over things with the brewery and well, if you’ve ever read a romance novel, I’m sure you can guess what happens next 😉

Since Sean has been trying to lay low, and a reporter has been poking around trying to get an exclusive interview for a “Where Is He Now?” segment, when he gets fired he decides to leave town and try to start a new again.  But he realizes that he doesn’t want to keep running and wants to stay with Natalie and goes back to the brewery – where the saboteur is striking. Will Sean and Natalie survive it? Well, I know the answer to that but you’ll have to read Hollywood on Tap to find out 🙂

I really liked the sub-plot in this story with the sabotage, it kind of made it more of a mystery romance which I enjoyed.

For years, Sean O’Dell has hidden his past as a Hollywood heartthrob from everyone at the Sweet Salvation Brewery. However, the arrival of nosey efficiency expert Natalie Sweet threatens the status quo. It doesn’t help that with her glasses, buttoned-up sweaters and always pulled-back hair that she’s uncovered one secret already: His attraction for hot librarian types.
Natalie has had enough of the strong-and-silent Sean submarining her efforts to change the brewery for the better. She’s ready to do whatever it takes to make her vision a reality, even if that means taking down the pig-headed and too-hot-for-his-own-good brewmaster.
Sizzling attraction battles stubborn determination as Natalie and Sean go head to head in a battle that’s anything but business as usual. 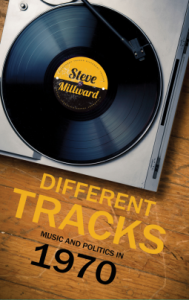 Different Tracks compares musical change and political change in the 1970s.  This is an interesting approach to a topic, but I think that if you explore the dynamic between the two for all the decades, there will be some sort of correlation.  (The author has also written a previous book about 1964 and this is the 2nd in a triology) The Beatles broke up, Simon & Garfunkel broke up.  People hoped the Vietnam War would come to an end.  Jimi Hendrix died.

The book looks at a lot of songs from this era as well as the state of the people and politics. The book consists of 8 chapters which look at different aspects of music and life. A very interesting read.  Lots of directories in the back with what music was mentioned in this book.

Steve Millward continues to explore the dynamic between musical and political change in his new book, Different Tracks: Music and Politics in 1970.

1970 signaled the end of an era. The Swinging Sixties came to a crashing halt as the world seemed to be changing for the worse. Ideological and generational rifts became deeper and violent protest more commonplace. Politicians dealt with realities, not dreams. The Vietnam War dragged on. As ever, popular culture mirrored it all with the death of Jimi Hendrix and the break-up of The Beatles. Yet these apparent crises produced a climate in which new ideas could develop, pointing the way to a decade when creativity and tumult went hand-in-hand.

‘This was the year when James Brown defined funk, prog bands reached a peak of extravagance and the search was on to fuse rock with jazz, folk and classical music… From the increased militancy of the Black Panthers, the Baader-Meinhof Gang and the Angry Brigade to the new ways of living advocated by foodists, feminists and futurists – 1970 shaped the future in so many ways!’ observes Steve.

Manchester-based Steve co-wrote From Blues To Rock while teaching music courses at Manchester University. Since then, he has contributed to Women In Music Now, Juke Blues and, as jazz correspondent, the Manchester Evening News. His broadcasting experience includes a two-year spell as BBC Radio 5’s pop pundit.

Different Tracks is the second book in a trilogy that started with Changing Times: Music and Politics in 1964 and gives a comprehensive analysis of a thriving music scene where singer-songwriters such as Joni Mitchell and Nick Drake rubbed shoulders with innovators like Curtis Mayfield and Frank Zappa.