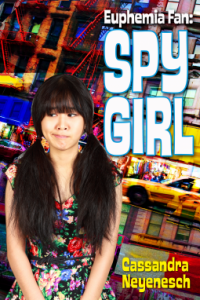 The story starts out with Euphemia Fan, a 15 year old spy – seeing her uncle kill a man by the train station.  She runs off so that he won’t see her and calls 911 to report the body. She meets Tyler – another spy kid who has been following her because he thinks that something is going on with her father that she needs to know about. Tyler shows up at her house later that night and tells her that she needs to leave because 2 men have just entered her house.  She and Tyler escape and get a ride to where her older sister lives.  Of course, her older sister finds Euphemia and Tyler’s story to just be a tall tale – that is until she ends up almost getting shot by a goon herself.

Now the 3 must figure out what is going on with their father, Baba, before it is too late. The story moves very quickly, the FBI gets involved and there is a lot of action and mystery throughout the whole book.  I was happy with the outcome and liked that in the end, everything was explained to my satisfaction.

It was spying that got me into this pickle…

Euphemia Fan, the only Chinese-American teenage girl in Brackybogue, Long Island, has a knack for spying on her neighbors. No empty house is unexamined, and no resident is ignored. Her eyes are sharp and her wits are keen. But when she sees her great uncle Jiu Jiu murder a man in cold blood, she must put her skills to the ultimate test.

How could Jiu Jiu, her elderly uncle who barely speaks English, commit murder? Is he leading a double life? Who is he working for? When her father goes missing and the police prove to be useless, Euphemia must use her spy skills to uncover the truth. With the help of a swoon-worthy co-spy named Tyler and her older sister, Lillian, Euphemia embarks on the adventure of her life. But can she save her family before it’s too late?