Book Review: The Shape Of My Heart 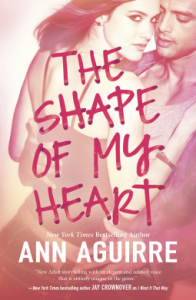 The Shape Of My Heart is the 3rd book in the 2B Trilogy. I had previously read the first book, I Want It That Way, but somehow missed out on the 2nd – As Long As You Love Me. (Yeah, they’re all named after BSB songs!)  Much like the first in the series, this book got off to a slow start, but at least this time I knew to power through the background and things would get better.  This book is about Courtney and Max – roommates who are BFFs.  When Max’s grandfather dies, he asks Courtney to take the 12 hour trip with him back home to Rhode Island to go to the services because he doesn’t want to go alone.  He was kicked out by his drunk Dad when he was 16 after getting a car accident that made his little brother need to be in a wheelchair. Max hadn’t been back since and wasn’t sure how things would go over.  During the course of the trip, it is obvious to everyone BUT Max and Courtney that they are totally falling for each other.

Finally, when the two get back, after Max tries to fix her up with a guy and it goes bad, the two realize that they are in love with each other and become boyfriend and girlfriend.  It’s the holidays and for Thanksgiving, Max’s Uncle and Brother come out to visit.  Courtney decides that for Hanukkah / Christmas she will head back to Chicago and bring Max along.  Only one problem – Max knows that Courtney comes from money and he calls her a “princess” but what he doesn’t know is just how well-off Courtney’s family is. She doesn’t believe her father’s money is hers, so she hasn’t really mentioned it to Max.  When Mom pulls Courtney aside to talk about how she doesn’t approve of Max, Max overhears and storms off.

They end up breaking up and Courtney moves out.  But was it all for nothing or will they end up back together again?

As I mentioned, this book got off to a slow start, but once I got about half way through I was flying through it because I wanted to see what was going to happen with Courtney and Max’s relationship and if they’d somehow find their way back to each other after her Mom was such a bitch.  I did enjoy this book and will have to go back and see about the 2nd book in the series which focuses on the roommate in 2B before Courtney moved in, Lauren.

Some people wait decades to meet their soul mate. Courtney Kaufman suspects she met hers in high schoolonly to lose him at seventeen. Since then, Courtney’s social life has been a series of meaningless encounters, though she’s made a few close friends along the way. Especially her roommate, Max Cooper, who oozes damaged bad-boy vibes from every pore.

Max knows about feeling losthe’s been on his own since he was sixteen. Now it’s time to find out if he can ever go home again, and Courtney’s the only one he trusts to go with him. But the trip to Providence could change everything.

It started out so simple. One misfit helping another. Now Max will do anything to show Courtney that for every heart that’s ever been broken, there’s another that can make it complete.