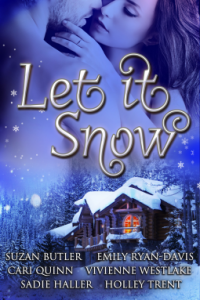 Let It Snow is Six Spicy Winter Romances.  The book is about 600 pages long – which can be intimidating – but there are 6 stories within it, so each one is in the ballpark or 100 pages.  It took me a while to make it through the book because I usually break up my romance novel reading with other stories as well, I’m a little burned out on romance stories now that I’ve finished this one!

The second story is All He Wants which is about Keith, who has come back home from the Marines for the holidays.  His best friend’s little sister has been staying at his place while he has been away.  She is pregnant but the father isn’t in the picture. Or at least, she doesn’t want him in the picture.  Keith needs to convince her that he wants to take care of her and the baby all the while she thinks maybe he is just into her because he has been away and not been with any woman for a long time.

Story #3 is Jingle Ball.  The receptionist wants to hook up with her boss but doesn’t want to put her job on the line.

The fifth was One Gold Heart which I think was my favorite.  Mac does a favor for her friend Sully and takes his place in a few concerts while he recovers from some broken ribs.  She has severe anxiety on stage so she has to take beta-blockers to get through it.  At first, Finn, doesn’t like this but once the two find out about each others pasts they try to help each other.  Finn is also a Dom so I guess you can figure out where things end up going…

All He Wants – Emily Ryan-Davis

All he wants for Christmas is her… After a long tour of duty abroad, U.S. Marine Captain Keith Moss is more than ready for some festive R&R, but first he must complete the most important mission of his life: convincing his best friend’s little sister to give him the gift of her heart.

Jingle Ball – Cari Quinn
This year, rocking the office holiday party has taken on a whole new meaning. All receptionist Wendy Stanton wants for Christmas is a chance for a relationship with her sexy, dominant boss outside the boardroom. But his secrets—and hot encounters including her other boss—are complications she never expected.


A Marquess for Christmas – Vivienne Westlake
Notorious gambler and pugilist, the Marquess of Kittrick refuses to settle down—until he loses his memory on a daring rescue mission. Violet Laurens is no cowering damsel in distress, and Kit soon finds that the widow can match him at any challenge. But falling in love is the hardest challenge of all.


One Gold Heart – Sadie Haller
When reclusive oboist, Mac Wallis agrees to replace an injured friend for the Christmas concert season, she gets more than she bargained for when she meets Dom, Finn Taylor and has to decide whether to take a chance or return to her life of seclusion.


Three Strikes – Holley Trent
The one woman the “Dark Dom” Max Fletcher wants is the one who doesn’t want him back. But magic has been known to happen during the Den of Sin’s Winterball. There, if he can warm his sometime-submissive Giselle’s heart for the night, he may be able to win her for good.