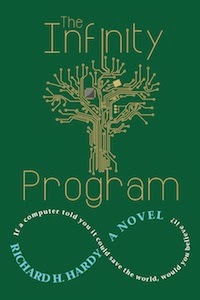 Jon Graeme and Harry Sale are unlikely friends. Harry is a world-class programmer, but

his abrasive personality alienates co-workers. In contrast, Jon is a handsome and easy-
going technical writer, the low man on the IT totem pole.

Sharing a love of nature, the men set out together, planning to go their separate ways–

but his friend is nowhere in sight. When Jon finds Harry unconscious on the floor of a

cave, Harry claims to have been lying there the entire time. But he is neither cold nor

hungry. What Jon doesn’t know is that Harry fell into an underground cavern, where he

Back at work, Harry jettisons his regular tasks and concentrates exclusively on inventing

new operating language to access the alien system. In the process he crashes his office’s

Super Computer and is fired. Jon convinces the company to give Harry a second chance,

arguing that the system he has invented will make them millions.

Jon has no idea what havoc Harry is about to unleash.

Richard H. Hardy was born in Glasgow, Scotland, during a week of relentless bombing

raids just before the close of World War II. The day he was born an incendiary bomb fell

on the church across the street from where he lived, so he is fond of saying that he

entered the world with a big adrenaline rush.

His family later moved to England and then on to America.

the country, wanting nothing more than to write fiction. A job driving a library van

allowed him free time to write several short stories and work on a novel.

He and his wife moved to New Hampshire, where he took an entry level job at a software

company. He was soon promoted to the technical writing department and ended up

producing over 500,000 words of online documentation. After a few years he was

promoted to the programming department and ended up as the Senior EDI Programmer,

throughout the U.S. and Canada.

After he retired, he started writing fiction again. The Infinity Program is his first

Where to find Richard H. Hardy: