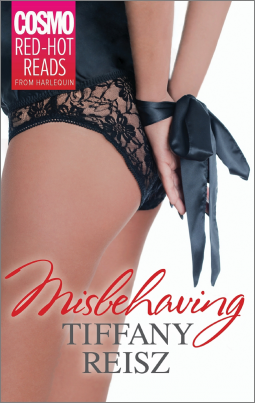 Another Cosmo Red Hot Read from Harlequin! I am considering only reading these from now on! (At least where my romance novels are concerned!) The main character in this book is Beatriz – and she is a blogger! We must have so much in common!  Well, maybe not.  Bea blogs about sex toys and the like.

We meet Bea and she is getting a call from her boss and being told that one of her coworkers can’t write their story and Bea must write something instead. Bea is on the way to her sister’s wedding and says maybe she can write an easy book review and the boss says that would be fine.  Before leaving she grabs an envelope off her stack of review items and heads out to the airport.

Then she realizes that the book she grabbed was a sex position manual.  The only way to review that is to try the positions. Who is she going to find at the wedding to try them with?

Fortunately, her sister’s husband to be’s best friend is also the “one who got away” for Bea. She fell in love with him when they were in college but Ben wanted nothing to do with her.  Bea’s sister Claudia finds out that it is because her fiance Henry told him to back off because he didn’t want things with Claudia to go south if and when Ben broke up with Bea.

It seems that the feelings between the two are mutual, and Ben agrees to help out with Bea’s “Work” and have sex with her using the manual as a guide.  While Bea is first looking at it as just work and ending after their week away for the wedding is over, will her feelings change? Does Ben feel the same way?

Another quick and easy read and I really enjoyed it Sometimes I don’t like how these things end but I think this one worked out to be just perfect! Lots of crazy wedding drama thrown in for good measure as well!

As a popular sex blogger, Beatriz gets paid to have orgasms. So being on deadline the week of her sister’s wedding isn’t as rough as it sounds. There’s just one hitch: Bea’s assignment is to write a review of a sex position manual, but she doesn’t have a plus-one to play with.

The good news: Ben, the one who got away back in college, is also attending stag—and he’s as temptingly gorgeous as ever.

The best news: He’s not planning on making the same mistake twice….