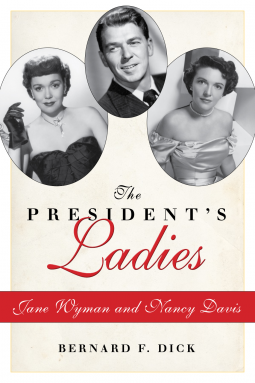 The President’s Ladies tells the story about former President Ronald Reagan and his two ladies – fellow actresses Jane Wyman and Nancy Davis.  Reagan was married to Jane for 8 years and Nancy was his wife during his politician years.  The book does take a while to get into, I had stopped and started it several times before sitting down and continuing it through the rest of the way.  Certainly a lot of information on all 3 of the actor’s lives and perhaps a bit too much information at time. (In that the book is long, not that it is full of juicy information!)

This perhaps would have been more interesting if it was on the screen instead of in print – with clips of the films mentioned that each were acting in to be seen instead of just read about.  A lot of information is in these pages and if you are interested in these 3 as actors or for their role in politics, I think you will find a lot of information in here that you will find interesting.  If you’re just a casual reader that thought the book might be interesting as I was, you may have a hard time making it through the book.

Ronald Reagan, a former actor and one of America’s most popular presidents, married not one but two Hollywood actresses. This book is three biographies in one, discovering fascinating connections among Jane Wyman (1917–2007), Ronald Reagan (1911–2004), and Nancy Davis (b. 1921).

Jane Wyman, who married Reagan in 1940 and divorced him seven years later, knew an early life of privation. She gravitated to the movies and made her debut at fifteen as an unbilled member of the chorus, then toiled as an extra for four years until she finally received billing. She proved herself as a dramatic actress in The Lost Weekend (1945), and the following year, she was nominated for an Oscar for The Yearling and soon won for her performance in Johnny Belinda (1948), in which she did not speak a single line. Other Oscar nominations followed, along with a Golden Globe for her portrayal of Angela Channing in Falcon Crest.

Conversely, Nancy Davis led a relatively charmed life, the daughter of an actress and the stepdaughter of a neurosurgeon. Surrounded by her mother’s friends—Walter Huston, Spencer Tracy, Katharine Hepburn, Lillian Gish and Alla Nazimova, her godmother—Davis started in the theater, then moved on to Hollywood, where she enjoyed modest success, and finally began working in television. When she married Reagan in 1952, she unwittingly married into politics, eventually leaving acting to concentrate on being the wife of the governor of California, and then the wife of the president of the United States. In her way, Davis played her greatest role as Reagan’s friend, confidante, and adviser in life and in politics.

Bernard F. Dick, Teaneck, New Jersey, is professor emeritus of communication and English at Fairleigh Dickinson University and is the author of Forever Mame: The Life of Rosalind Russell;Claudette Colbert: She Walked in Beauty; Hollywood Madonna: Loretta Young; and several other books.