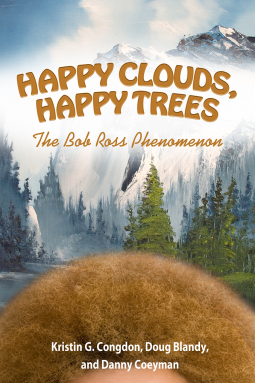 Happy Clouds, Happy Trees tells the story of painted Bob Ross.  The book starts with a bit of an introduction to Bob and the phenomenon surrounding him. (I feel like everyone knows who he is and everyone loves him and loved to watch him. Or at least pretty much everyone I know feels this way when his name/picture comes up.)  Then it goes in to the real meat of the book, which is separated into 4 parts. The Life and Times of Bob Ross, The Legendary Life of Bob Ross, Reflections on Bob Ross and his Work and Bob Ross Lives.

The book begins with the author mentioning how there isn’t all that much information out there about Bob Ross – many know who he is moreso by his appearance (hair) and that he used to pain happy trees and happy clouds rather than by name. Despite the lack of information being out there, I think that what they were able to find and compile for this book was a lot!  The book does contain some artwork – but it is all other people’s depictions of Bob and not Bob’s work.

Bob will live on through his art and as a cultural phenomenon. (You can find stuff about Bob on Twitter and Tumblr – as well as other sites – that didn’t exist during his life from those who are still just discovering him.) He may even be more popular now than he was during his life.

Readers will know Bob Ross (1942–1995) as the gentle, afro’d painter of happy trees on PBS. And while the Florida-born artist is reviled or ignored by the elite art world and scholarly art educators, he continues to be embraced around the globe as a healer and painter, even decades after his death. In Happy Clouds, Happy Trees, the authors thoughtfully explore how the Bob Ross phenomenon grew into a juggernaut.

Although his sincerity in embracing democracy, gift economies, conservation, and self-help may have left him previously denigrated as a subject of rigorous scholarship, this book uses contemporary art theory to explore the sophistication of Bob Ross’s vision as an artist. It traces the ways in which his many fans have worshiped, emulated, and parodied him and his work. His technique allowed him to paint over 35,000 paintings in his lifetime, mostly of mountains and trees in landscapes heavily influenced by his time in the Air Force and stationed in Alaska.

The authors address issues of amateur art, sentimentality, imitation, boredom, seduction, and democratic practices in the art world. They fully examine Ross as a painter, teacher, healer, media star, performer, magician, and networker. In-depth comparisons are made to Andy Warhol and Thomas Kinkade, and mention is made of his life in relation to Joseph Beuys, Elvis Presley, St. Francis of Assisi, Carl Rogers, and many other creative personalities. In the end, Happy Clouds, Happy Treespresents Ross as a gift giver, someone who freely teaches the act of painting to anyone who believes in Ross’s vision that “this is your world.”

Kristin G. Congdon, Winter Park, Florida, is professor emerita of philosophy and humanities at the University of Central Florida. Her authored or coauthored books include American Folk Art: A Regional Reference (2012) and Just Above the Water: Florida Folk Art (2006). Doug Blandy, Eugene, Oregon, is professor and senior vice provost for academic affairs at the University of Oregon. He has been published in Studies in Art Education and Art Education among other journals and has coedited five anthologies in art education. Painter Danny Coeyman, Brooklyn, New York, earned his MFA from Parsons in 2006 and received a Jack Kent Cooke Fellowship.