Book Review: The Promise of a Pencil

April 3, 2014 by ConcertKatie No Comments 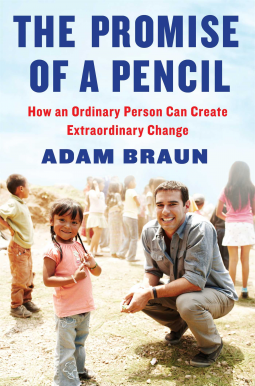 The Promise of a Pencil is the story of Adam Braun, who created the organization – Pencils of Promise. I had first heard about this organization through Justin Bieber’s twitter a few years back which is why I was interested in reading the book.  The book tells about the events leading up to him creating the organization including his semester at sea.  The whole book was quite an interesting read and I found it to be incredibly inspirational. I wish I had the drive and the guts to pour myself into creating an organization and turn down other opportunities to do what I love like Adam did!

It wasn’t until about halfway through the book that the Bieber connection became more clear.  Perhaps I should have paid more attention to Adam’s last name, “Braun”. But Justin makes and appearance in the book because Scooter Braun – Justin’s manager – is Adam’s brother! Of course!

I also found it interesting that the chapters were labeled as “mantras” and each mantra was explained through the accompanying chapter and the story within it. Pencils of Promise has been incredibly successful – and started after a boy said all he wanted in the world was a pencil. (Adam gave him one that he had on him.) Now they have built hundreds of schools and are helping to educate children that otherwise would not have been able to go to school.

A truly inspiring book and a must read.

Adam Braun began working summers at hedge funds when he was just sixteen years old, sprinting down the path to a successful Wall Street career. But while traveling as a college student, he met a young boy begging on the streets of India. When Braun asked the boy what he wanted most in the world, he simply answered, “A pencil.”

This small request became the inspiration for Pencils of Promise, the organization Braun would leave a prestigious job at Bain & Company to start with just $25 at the age of twenty-four. Using his unique “for-purpose” approach, he helped redefine the space in which business, philanthropy, and social media intersect. And a mere five years later, Pencils of Promise has now built more than two hundred schools around the world, proving that anyone can create a movement that matters.

The Promise of a Pencil chronicles Braun’s journey through more than fifty countries to find his calling, as each chapter explains the steps that every person can take to ignite their own passion and potential. His trailblazing story takes readers behind the scenes with business moguls and village chiefs, world-famous celebrities and hometown heroes. Driven by compelling stories and shareable insights, this is a vivid and inspiring book that will give readers the tools to unlock their own extraordinary journey of self-discovery.

If you have ever wanted a more purpose-driven life, if you have ever felt like you could become more than your current circumstances allow, it’s time to ask yourself, “What do I want most in the world?” And through the lessons shared in this book, turn those ideas into reality.