An evening with Colin Mochrie and Brad Sherwood 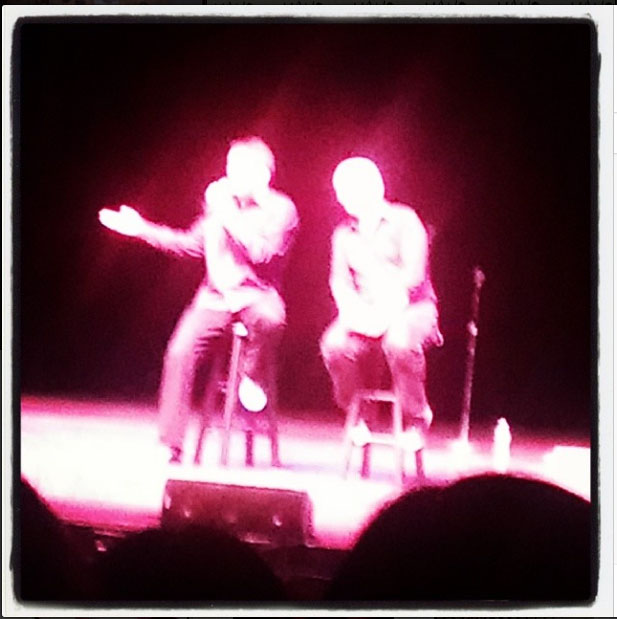 Saturday night Colin Mochrie and Brad Sherwood – probably best known for being on Whose Line Is It Anyway – came back to the Lyman Center at Southern Connecticut State University.  They said it was their 4th time performing at the University and it was my second time attending.

The show is completely improvised with things being yelled out from the audience, which makes for a completely ridiculous evening. Some of the bits are from Whose Line Is It Anyway? And other bits will never be seen on Whose Line, they tease when the show starts.

The first bit included 2 members of the audience who were to act as any props mentioned in the scene. After taking some time to get their jumpsuits on –  “She puts her pants on like everyone else, one sleeve at a time”, Brad teased, the two did a Shakespearean scene (chosen from a stack of cards) where one kingdom was visiting another.  The audience props needed to be trees, a draw bridge, horses and backpacks, among other props.

In another bit, several audience members were brought up on stage and would have to give an answer when either Colin or Brad raised their hands to fill in the blank in the scene.  Colin and Brad were hunting a crocodile – named Big Al.  It turns out that the croc had eaten Colin’s grandmother, near Colin’s mom’s house.  And that Brad had a tiny wife that fit in his pocket and was able to walk and read minds.

During the Crime bit – Colin was listening to loud music while Brad instructed us to come up with some sort of crime Colin committed.  He was riding a flamingo and gesticulated in public in Naugatuck – at Archibald’s Cat Fluffing & Skillet Tossing Incorporated.  He left a tomato soup can at the scene of the crime.  Brad then had to get Colin to figure out what the crime was and confess to it.

They also did sound effects – Colin had 1 person on stage responsible for his sound effects while Brad took a mic out to the last row and had them alternate the mic from person to person in the row for the sound effects.  They chose their scene from the phone book – it landed on F so they had a Framing & Fruit Basket business.

My favorite bit had to be one called “Kick It” where the two would go through a scene (this one about collecting rubber duckies) and whenever one heard the other say something that sounded like a good song – they’d say “Kick It” causing the other to go into the rap song until the other said “Word” (I’m not sure I explained that really well.)  Most of the rap bits were relatively short- with Colin cheating and “Wording” himself on one of them – until the last one – where Brad rapped about a toy box for what seemed like forever as Colin just watched and drank imaginary cups of water. It actually turned out to be a pretty good rap including all sorts of toy box toys including etch-a-sketch and legos.

At the end of the show they sang a song and recapped the evening.

A ton of fun, a ton of laughs and if they are coming near you, definitely check them out!  http://www.colinandbradshow.com/