Book Review: How to Barter for Paradise

February 18, 2014 by ConcertKatie No Comments 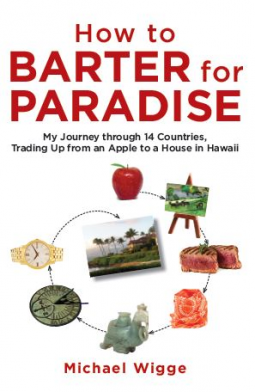 Michael Wigge is back with “How to Barter for Paradise” which tells of his journey through 14 countries, trading up from an apple to a house in Hawaii.  Yes, he traded an apple for a house in Hawaii. (Although not quite that simply.)  I have previously reviewed Michael’s other book How to Travel the World For Free so I was pretty excited to read about his adventures and see how he ended up trading an apple for a house.

The story was really quite fascinating and he meets a lot of interesting characters along the way.  Some don’t want to barter, some are all for it and others want to sue him.

In the end, Baterman, as he becomes to be known, does end up getting the house in Hawaii and I am amazed.

Once again, not sure that what he does is for me – but I certainly admire him for having a dream and figuring out a way to make it happen – no matter how crazy or out there it may seem to be to others.

Most people like to travel in comfort, but Michael Wigge isn’t like most people. After traveling the world without money for 150 days, he faces his next big challenge: turning an apple into a house in Hawaii.

Wigge visits fourteen countries and six continents exchanging goods for more valuable ones, and he meets an array of good-humored people who take his deals. Taking on his Barterman persona, he trades the apple for sixteen cigarettes in Germany; a couple of trades later in India, he fixes up a motorized rickshaw and trades it for silk; in Australia, a millionaire amuses himself by offering him an art piece for the silk if Wigge feeds a wild crocodile. Finally, he arrives in Hawaii armed with two bicycles, a surfboard, Portuguese porcelain, three solid-gold coins, a Porsche wristwatch, a record by musician Coati Mundi and an accompanying contract for 25 percent of the proceeds from his next single, a voucher for a twonight stay in a mansion in Los Angeles, and a piece of original artwork by painter Alex Stenzel—now he just has to find someone to give him a house in exchange.

On the two hundred–day journey around the world, Wigge makes forty-two trades and meets strange, kind, funny, friendly, eccentric, and good-natured people who help him in his quest. It’s a journey you won’t want to miss!