February 18, 2014 by ConcertKatie No Comments 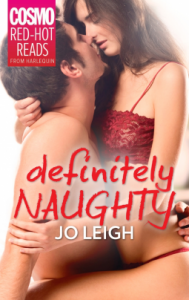 Definitely Naughty is another Cosmo Red Hot Reads from Harlequin. (And another Christmas themed book that I haven’t been able to review until now. That’s the downside to selecting so many books and trying to only do 1 post a day!)  Aubrey is a window dresser at a Broadway Lingerie Boutique in New York City.  When she thinks that she is not going to come up with something for the windows by Christmas Eve Eve, she leaves the shop only to have a “Hot Guys” Trading Card fall into her hand from the sky!  Liam is a hot detective and a Mets fan! (Which makes Aubrey say ‘Ugh’ and made me almost not finish the book!)

Aubrey thinks that maybe Liam can be her muse and give her inspiration for the windows that she has to design and calls him up to meet.  Apparently with the hot guy cards you’re supposed to call who submitted the person as the hot guy, but Aubrey just tells Liam that she did and asks him to meet her at a bar.  He agrees and she asks if he will be her muse and have “lots and lots” of sex with her until Christmas Eve Eve, when is the big unveiling for the window.

Somehow, he agrees. (I mean, I guess if he didn’t, we wouldn’t have much of a book now would we?)  But both of them end up falling for each other even though their original plan had an end date.  Will Aubrey push Liam away? Will Liam let her if she tries? Hmm… read the book to find out 😉

This book was just over 100 pages and an easy read on a snowy afternoon!

A Hot Guys Trading Card just fell from the sky. Could this beautiful piece of man be my muse? It’s raining men. #hallelujah23h

OMFG, Detective Liam Flynn even hotter in person. May explode into a million pieces of lusty lady bits. #HandcuffMeNow 15h

It’s on. Have convinced the über-hot cop to be my naughty muse until Xmas. Two weeks of sex, here I come! *ahem* 14h

But I only have him until Christmas. Keep it together, Aubrey—and DON’T fall for him. #SexNotLove 3m