Book Review: The Woman’s Guide to How Men Think

February 2, 2014 by ConcertKatie No Comments 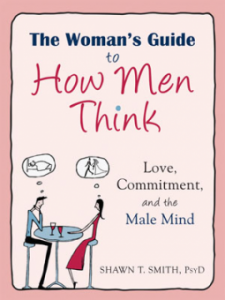 The Woman’s Guide to How Men Think is a book written by a guy giving some insight into the male mind.  Honestly I am not sure that women will ever completely figure out how men think, but this book did give some interesting information that I will definitely remember.  Men certainly show emotions and deal with things differently than women.  The book kind of tries to explain why men think the way they do as well, which I’m not sure really goes for every male ever but maybe just the majority.

My main reason for wanting to check out this book is because I deal with men at my job ALL DAY and there are a couple that I can never understand, ever.  Although the book kind of leans more from men on a romantic relationship standpoint, there were some chapters that I think I can put to good use and maybe I can decode these emails that I’ve been getting that seem like nothing but double talk to me!

If you’re a woman confused by men (and really, if you’re not then you are some sort of crazy genius) then definitely take the time to check out The Woman’s Guide to How Men Think.

Comedian George Carlin once said, “Women are from earth. Men are from earth. Just deal with it.” Though witty, this sentiment fails to recognize one of the real truths in life: that both genders are completely mystified by one another, and often have a mile-long list of complaints for the opposite sex. Yet, generally speaking, both men and women want to get along—especially if there’s romance involved.

A Woman’s Guide to How Men Think offers a practical, humorous, yet compassionate guide for women who want to learn the secrets of the elusive male mind. With author Shawn Smith’s trademark humor, you’ll come to understand why men think and see the world the way they do, and how to work with men to cultivate understanding and communication in relationships, without expecting men to be creatures that they are not. This isn’t a male-bashing book about how men should be more like women, but a book about how men actually are, and how women can use this understanding to get what they need from their relationships.

You’ll also learn why men often feel frustrated and criticized, how to deal with lack of communication in ways that don’t put men on the defensive, and how being curious and compassionate (while not accepting disrespectful or abusive behavior) instead of dismissing men for their inherently male traits can lead to greater understanding between the sexes.

The plain truth is that both men and women are from planet earth. But that doesn’t mean we are the same. If you are looking for an insider’s guide to the ever-elusive male mind, this is the book for you.

The author, Shawn Smith, is a psychotherapist with a blog at ironshrink.com.