Book Review: It Happened in Wisconsin

February 19, 2014 by ConcertKatie No Comments 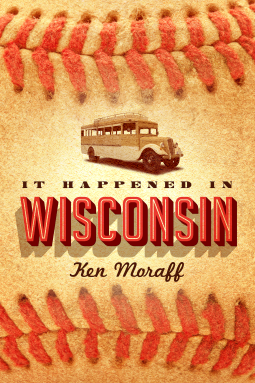 It Happened in Wisconsin is the story of the Racine Robins. They are a baseball team during the Great Depression in the late 1930s.  The team is pretty good, but their baseball season gets side tracked a bit due to a snowstorm.  The players mentions that it shouldn’t be snowing during baseball season.  (Funny, because just last year there were games postponed due to snow in the MLB and that was a bit of a rarity!)  The team is forced to stop driving and find a hotel to crash at.  Once at the hotel, things with the team begin to fall apart.

All of the characters have their own personalities and dreams and while the baseball was being played they seemed to be getting along but while they are stuck in the hotel, there are temptations all around.  Some of them are missing their loves back home, others are finding new loves in the hotel.

I was expecting this book to have a bit more baseball in it than it did – the majority of the book was them at this hotel due to the storm. The story also seemed to bounce around a bit – but I think that is the “fault” of the narrator who is looking back on everything that happened rather than telling it as it happened. While it makes for a bit of bouncing – it is reminiscent of if you were talking to someone who is elderly about their stories of the past.

In an America ravaged by the Great Depression, a talented but ragtag baseball team sets out to change the world. Barnstorming the back roads and dusty ballparks of the Midwest, the Racine Robins rally fans to the populist cause, raising money for soup kitchens and strike funds even as they thrill small-town crowds and dazzle opponents on the field. Yet winning the hearts and minds of the people turns out to be easier for the players than facing the twin seductions of love and money, conflicting desires that threaten to derail everything they are fighting to achieve.

After a sudden April snowstorm forces the Robins to find shelter in the Rockefeller hotel, the team begins to pull apart. Tensions mount—one player falls in love for the first time—and old friendships threaten to unravel as the men face temptations and ambition. Can this tough, tight-knit group stay true to its great cause when dreams and longing come knocking?