Book Review: When I’m With You

January 2, 2014 by ConcertKatie No Comments 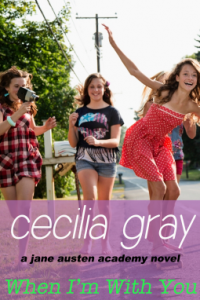 When I’m With You is about an aspiring actress named Kat.  It is a modern retelling of the Jane Austen book “Northanger Alley” Kat gets the lead in all the school plays and now on Christmas break she gets to hang out with Josh who is a hot up and coming actor that went to the school and invited her along as his personal assistant.  When she gets to the set she finds out that they are looking for extras for a scene and wants to have a shot at it.  Josh said he already did her one favor by bringing an assistant when no one else did so he was not going to help her.  She ends up befriending one of the leads in the movie, Izzy and she gets her cast as an extra. Meanwhile, she seems to have a connection with Henry, the other lead on the movie.  They keep making “dates” like meeting for hot chocolate or dinner, but Izzy keeps  telling Kat that Henry is hung up working on lines or rehearsals or has left with another girl and pulls Kat away.  Kat continues to believe her even though Henry keeps telling her that isn’t whats happening.

When they film the scene with Kat as an extra, the director seems to like what she is doing.  But Izzy keeps deciding that HER character should be doing the ad libs and steals everything from Kat’s character. Now Kat isn’t even sure she will make it in as an extra.

Henry, Josh and Kat go to stay at Henry’s dad’s place (he is also an actor and supposed to be the reason why Henry gets all of his jobs) and Kat thinks that she sees his father with another actress – even though he is supposed to still be married to Henry’s mother.  When she mentions it Henry gets upset, but takes her to follow his Dad after he begins doubting him as well.  They see him leave with an actress and a couple of days later the news has made it to all the gossip sites.  Henry blames Kat for blabbing even though she assures him that it was not her! Henry doesn’t know who else would know.

Kat ends up leaving LA to go back to school early, thinking that Henry hates her.  But is that really how the story will end?

I thought that this was a cute story, a great YA novel and although I’ve never read Northanger Alley I did check out the snippit of the plot summary and it does seem to be a very similar storyline. Now I think I may have to check out some of the other Jane Austen Academy books!  A quick read and a lot of fun to be in the indie film world!

Dive into the fabulous, fun lives of six Academy girls as their friendships are tested, torn and ultimately triumph.

Kat is destined to be a star and her big break has arrived at last! As the assistant to a celebrity classmate on the set of a feature film, she’s going to show everyone she has what it takes. That is, until she discovers pursuing her dreams may mean forfeiting her heart. Unless she can find a way to have both…

The last thing that the girls at the elite Jane Austen Academy need is hot guys to flirt with. But over the summer the school has been sold, and like it or not, the guys are coming. And it’s about to turn the Academy—and the lives of its students—totally upside down…