January 20, 2014 by ConcertKatie No Comments 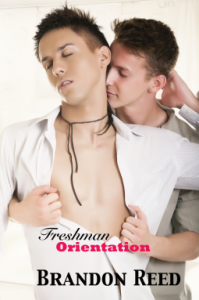 Freshman Orientation is a short novella about Ryan, a college senior who is looking for a hot new Freshman to hook up with.  His best friend finds 4 guys that he thinks that Ryan might like from the incoming Freshman.  Ryan narrows it down to 2, though he really likes one way more than the other.  He messages them both on facebook and gets a reply from one – but it took 36 hours.  While the one he liked the most, Sean, doesn’t message him back, he does turn up in one of Ryan’s classes!  The two end up hitting it off and have a fast relationship.  Although it seems like something is always coming up just when things get hot and heavy.  Ryan is worried that once they do finally hook up, that Sean will leave.

This is a gay erotic story – and I believe the first of it’s type that I had read.  If you’re not interested in reading that sort of thing, then click the little X in the top corner because this is not the book for you!  Beyond the relationship I thought it was a cute story.  I liked how Ryan’s best friend showed the guys to him in the order of who he thought he would least like to most like. Totally something I can see me doing with my friends too! And the reasons for their hookups not working out were pretty funny, though I am sure for them super annoying.  A fun story if this is a genre that would be of interest to you.

Welcome to Pauer Bautam University… where gays… young and old… come to play.

Hunky college senior Ryan Kelly hasn’t gotten any in weeks… but that’s about to change. A new wave of freshmen are swarming the college campus, and he’s got his eyes set on a young hottie named Sean. Will Ryan’s dry spell finally come to an end?