January 15, 2014 by ConcertKatie No Comments 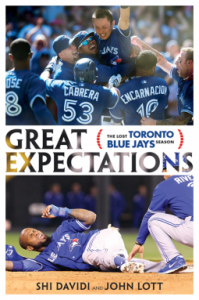 Great Expectations recaps the Toronto Blue Jays 2013 season.  From the winter meetings and off season signings of stars, to throughout the season.  Since there are a couple of my favorite Mets on the team now, I figured I’d check out the book.  There is some behind the scenes look at how they got Jose Reyes among others from the Marlins and how they got RA Dickey as well as some other players too. The ones I don’t care about 😉

An interesting inside look at a team that seemed stacked to do a bit better than they actually did.  Definitely a lot of thorough reporting on the team and an in depth look.

In a one of a kind look at the Toronto Blue Jays 2013 season, two seasoned sports journalists take readers behind the scenes as the team stocks up on stars, revitalizes its fans and embarks on a campaign of shocking disillusionment. Great Expectations begins with a detailed look at how general manager Alex Anthopoulos pulled off the blockbuster trade that acquired flashy shortstop Jose Reyes, potential pitching ace Josh Johnson and steady left-hander Mark Buehrle. Then came the delicate, frenzied negotiations with the Mets that landed erudite knuckleballer R.A. Dickey, the National League’s Cy Young Award winner in 2012. The book examines the challenges that Reyes, Buehrle and Dickey faced in their formative years and during the rocky 2013 season. It is also replete with details about Brett Lawrie, the team’s lone Canadian, whose kinetic style of play is a double-edged sword; José Bautista, the two-time home-run champion whose crown began to slip during a difficult 2013 season; Munenori Kawasaki, the genial, quirky infielder who became an overnight fan favourite; and Anthopoulos himself, who, by season’s end, was inciting the fury of the same fans who had praised him as a genius a few months earlier. Featuring insightful analysis and a colourful collection of candid photos, Great Expectations is a fascinating tale of a season gone wrong.