January 6, 2014 by ConcertKatie No Comments 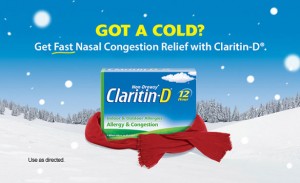 Claritin-D® is known for providing non-drowsy relief from allergy symptoms, but did you know it works as hard on your nasal congestion due to a cold as it does on your allergy congestion? When your day comes with nasal and sinus congestion due to allergies or colds, you need the power of Claritin-D!

Recently I had the chance through bzzagent to try out Claritin-D as a cold medicine instead of the usual allergy relief.  Unfortunately (or fortunately, depending on how you look at it!) I did not have a cold from when the item came to be reviewed until it was time to post but my brother did and tried it out.  After a few times using it he started to feel much better.  We had no idea that it could be used for nasal congestion due to cold AND allergies and are glad to have it in stock in our medicine cabinet year round.

Book Review: The $7.50 Bunny That Changed The World

Flopsy is a very special bunny that was given to a shelter and adopted by his Mom who then wrote this book.  She realized that he was special and made him a facebook page and he became a spokesbunny for educating people to find out about their pets and their needs before adopting them.  Flopsy got a little sister, Bella, and together they helped educate people.  Then it was time for Flopsy to move on, his life here on earth was over.  But he would continue working with his Mom who continued to rescue rabbits and help them transition.

The story is told from the point of the view from Flopsy – though I’m sure he told his Mom what to type for him! 😉  A sweet story about an even sweeter bunny rabbit!  It is a short story – only 38 words, but it will certainly warm your heart and make you think.

Winner of two 2013 Indie Next Generation Finalist awards, “The $7.50 Bunny That Changed the World” is the story of Flopsy Parker who was dropped off at a North Carolina shelter in the fall of 2010. By 2011, after he had trained his mother Gretta to be his ghost writer, he was inspiring people on Facebook with his message of adoption and helping other rabbits around the world that needed homes. This delightful, heartwarming, and real-life story, as told from Flopsy Parker’s point of view, is sure to tweak your bunny bone. “The $7.50 Bunny That Changed the World” is a tribute to his life, the people he inspired, and proof that even the smallest of creatures can live the biggest of lives.