Book Review: Crazy For You

January 19, 2014 by ConcertKatie No Comments 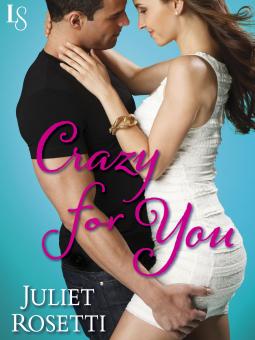 The main character in this book is Mazie – who is out of prison after being wrongly accused of killing her husband. For about a week she lives with Ben Labeck – the gorgeous who helped her solve the case of who really killed her husband.  But when he leaves for Montana for work and she starts a job as a mystery shopper their relationship ends.  Her boss, Rhonda, is 6 weeks behind on paying her but she continues to mystery shop and write reviews.  When she writes a negative review of an establishment, but later sees it posted as all 5/5 ratings – she is called into her bosses office and is fired.  She ends up going to work at a coffee shop that she had previously shopped, where the dress code for the waitresses is lingerie.  Then her ex-boss turns up dead – discovered by her ex-boyfriend Ben.  Both of them are suspects in the murder, as Ben was the last person seen with her and Mazie had an altercation with her before she was fired.  The two now need to work together in order to find out who really killed Rhonda in order to get themselves off the hook.

I liked that this was a romance novel mixed with murder mystery.  There is a lot of action going on with the investigation, though not so much between Mazie and Ben as Mazie says that they must work strictly as friends, even though Ben seems like he wants a big more.  After they figured out who did it and can get them to confess, maybe then they can realize they never wanted to break up with each other in the first place?  A quick read, a lot of fun to read too.

In the tradition of Janet Evanovich and Susan Elizabeth Phillips, Juliet Rosetti ups the ante in her laugh-out-loud funny Escape Diaries series, as Mazie Maguire must use any means necessary to keep her main squeeze out of the slammer.

Once you escape from prison and ride off into the sunset with the gorgeous guy who helped you nail a killer, you live happily ever after, right? Well, not exactly—not if you’re Mazie Maguire, and the flow chart of your life looks like a pinball machine. Mazie has broken up with her guy, Ben Labeck, she can’t pay her rent, her car is infested with mice, and she’s working at a coffee shop where the dress code is teddies, thongs, and toe-cleavage heels. Now Ben is the chief suspect in a murder investigation, and Mazie’s tapping into her fugitive wiles to keep him out of jail. Strictly as friends, she vows. No kissing, no touching, no romance. But how is Mazie supposed to keep her thoughts platonic when her “buddy” is giving her erotic back rubs, and a make-believe-we’re-newlyweds charade puts her in the mood for a wedding night?