January 1, 2014 by ConcertKatie No Comments 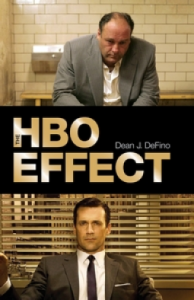 While I have never had HBO in my life, I am fully aware of their impact on things.  HBO is a bit of a pioneer when it comes to television and programming and this book explains that.  And it all started with a Christmas Ornament!  I am glad that the majority of the HBO shows are now either on DVD or in syndication because this book definitely got me interested in watching them or re-watching them – but more to see how they are put together than for their content.  The series finale of The Sopranos is still one of the most talked about finales ever.

No advertisers to please, no censors to placate, no commercial interruptions every eleven minutes, demanding cliffhangers to draw viewers back after the commercial breaks: HBO has re-written the rules of television; and the result has been nothing short of a cultural ground shift. The HBO Effect details how the fingerprints of HBO are all over contemporary film and television. Their capability to focus on smaller markets made shows like Sex and the City, The Sopranos, The Wire, and even the more recent True Blood, trigger shows on basic cable networks to follow suit. HBO pioneered the use of HDTV and the widescreen format, production and distribution deals leading to market presence, and the promotion of greater diversity on T.V.(discussing issues of class and race).
The HBO Effect examines this rich and unique history for clues to its remarkable impact upon television and popular culture. It’s time to take a wide-angle look at HBO as a producer of American culture.