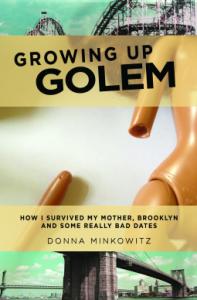 Growing Up Golem is How I Survived My Mother, Brooklyn and Some Really Bad Dates by Donna Mikowitz.  This book took me a while to get in to, and after reading one chapter I was almost ready to give up on reading it, but when checking out other reviews to see what others though everyone said that it was a great book so I decided to give it a second go.  A Golem, in Jewish tradition, is a creature created by magic, often to serve its creator.  Donna believes that she was created as Golem, half herself and half her mother, to serve her.  Even after she moved out she believed that her mother still seemed to have some remote control to still control her from afar.

Once I got into the book it did become the hilarious story that other reviews had said it would be. I also liked Donna’s writing style and how throughout the book she would acknowledge the reader with comments like, “oh reader”.  Certainly an interesting read and interesting concept on life.

“Rich and wild, dark and funny, as fearless as her legendary journalism and as scary as a fairy tale. A serious writer at the top of her game. I love this book.”

In the tradition of Portnoy’s Complaint and Alison Bechdel’s Fun Home, Donna Minkowitz’s Growing Up Golem is an incisive, often funny memoir about growing up inspired by the Jewish legend of the golem.  The author’s mother told Minkowitz and her sisters as children that she could do kabbalistic magic, and growing up, Minkowitz believed it. Her mother, a compulsively creative and unusually powerful figure, exerted even more sway over Minkowitz and her sisters than mothers typically do over their children, so it is the “magical realist” premise of the book that instead of giving birth to her, her mother actually created Minkowitz as her own personal golem, an animated servant made of clay.

Matters come to a head when a disabling arm injury renders her almost helpless – unable to use a computer or even lift a glass of water. She must find a way to work, find people who love her, and stand up for her own desires – against the bossing she’s always tolerated from girlfriends, mother and anyone else she meets- before her injury gets even worse.