January 4, 2014 by ConcertKatie No Comments 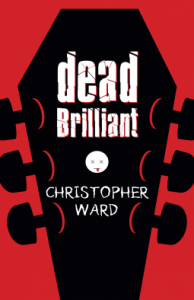 I really thought that I was going to like Dead Brilliant.  It seemed like it would have a lot of drama in it, but it took me too long to get in to it.  In fact, so long that the book ended up expiring and I was unable to finish it before it expired.

So unfortunately I can’t give you a decent review of the book. I think that it really missed the mark of what it was trying to do and if it caught my attention quicker in the beginning then maybe I’d have followed through.  It’s not often I don’t finish a book!

(Although, perhaps if it didn’t expire I’d have given it a second chance – I just didn’t have the option to.)

It’s all slipping away from Roc Molotov — his band, his girlfriend, and worst of all, his ability to play the game demanded by the star-making machinery of the music business. When the best record he’s ever made is about to pass unnoticed, his oldest friend and manager, Uncle Strange, concocts the perfect scheme. Roc will fake his death, on MTV, in front of millions of viewers, assuring massive success on his latest project and the ability to create a body of “posthumous” songs to feed the grieving fans and satisfy his still-active artistic imagination. The plan works to perfection, but the ever-restless Roc finds that being dead has its limitations in this novel that’s sex, death, and rock n’ roll, played in a satirical key.