August 4, 2013 by ConcertKatie No Comments

Friday afternoon boyband Midnight Red did a performance in the Dunkin Donuts Music Lounge.  I really didn’t know much about them but I have a few friends who absolutely love them so I figured it would be worth it to check them out.  The 5 guys did a chat and live performance where they performed Rihanna’s Diamonds, Bruno Mars Treasure and their latest single, Take me Home (available on iTunes now!)  They won me over when they said that even though they toured with NKOTB and BSB they really love NSYNC and hold them as the pinnacle of boybands.  They also said if the Spice Girls got back together they’d want to work with them or working with their label mate Katy Perry would be cool as well.

They’ll be heading out on the road this fall with Austin Mahone on the east coast.  Unfortunately it looks like I won’t be able to make it to any of the dates but if you can be sure to check them out!

After the performance we got to do photos with the guys and they were saying how they liked my shoes.  When I told them I designed them myself they asked if I used Nike ID and I said yes and then they asked if I could design them shoes too! haha. 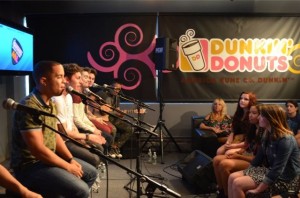 Here I am intently watching them during the chat. We weren’t allowed to take any photos so I just tried to take it all in and stole a few from KC101’s site for the scrapbook 😉