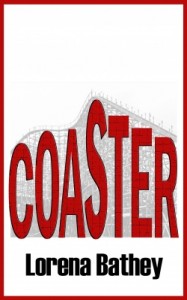 COASTER is and interesting book.  There are many, many characters included and while in the very beginning I did have trouble keeping track of who went with who, as the book moved on I didn’t have much of a problem.  The book starts out with the amusement park opening and there is a man (who is known just as “the man” for most of the book) enjoying a beer outside and waiting for his handiwork to explode.  We meet Roger, the maintenance man at the park who has been there for over 25 years.  There are 3 teen girls in line waiting to ride the park’s famous coaster. There is a family of 4. There is a brother and sister on holiday from England.  One of the teen girls gets out of line to use the bathroom and the workers won’t let her back in to meet up with her friends.  She waits for them at the exit.  Except while she is waiting – the bomb goes off.   She loses consciousness and hits her head.  Roger rushes to the scene and helps find someone to get the girl to safety.  It is clear that all 8 riders on the coaster have been killed.  Several others in line were injured or killed.  How did this happen?

It takes a bit before they can figure out who the 8 on the coaster were.  Their families are notified.  The brother and sister on holiday from England are related to the Queen.  The two other teen girls were on the ride.  The family of 4 as well.  We are then introduced to their families and see how each of them deal with the grief.  Some cannot handle it.  Others use it to better their own lives.  Others aren’t quite sure what to do and isolate everyone that wants to help them until they can make sense of what happened.

Meanwhile – no one knows who did it.  The park has been closed for over a week and is losing money.  They want to bring this to an end so that the park can re-open again.  They are a big corporation and they are out to make money.  They need to find a fall guy and that guy is of course Roger who checked the tracks that morning but didn’t see anything suspicious.  Meanwhile, the local cops and FBI are on the case and trying to figure out who it might be that did such a thing.  They keep narrowing down their leads and suspect lists, but will they ever find “the man”?

This book was a bit different than others I’ve read – there is a whodunit portion of it because it is down to the wire and you want to know if the FBI can track down the man and get Roger off the hook, but then it also goes deeper in the after effects of what happened and how all the families of those who were on the ride are affected.  It really shows how there are so many different ways to deal with grief and while I’m not really sure there is a right or wrong way to deal with it – it certainly seems that some of the family members came out on top while others, didn’t.
I received one or more of the products mentioned above for free using Tomoson.com. Regardless, I only recommend products or services I use personally and believe will be good for my readers.

When a bomb explodes at an amusement park, eight people are killed.  The tragedy and loss changes the lives around them.

When happens when disaster touches the survivor’s lives?

Will it inspire them, strengthen them, or destroy them?